Martin Luther King Jr. and the Unfinished Work of Nonviolence

More than ever, Martin Luther King Jr.'s insistent critiques of the insidious and progressive nature of violence are relevant to our contemporary moment.

In one of his final essays, Martin Luther King Jr. stressed his absolute commitment to nonviolence. He insisted: “I plan to stand by nonviolence because I have found it to be a philosophy of life that regulates not only my dealings with the struggle for racial justice but also my dealings with people, with my own self.” King had urged from the beginning of his campaign against racial oppression that there were definite social consequences of nonviolence. He also argued that the individual fight to instill and internalize love and genuine concern for the welfare and flourishing of others was necessary to replace “an internal spirit of violence” in the very struggle against those who supported and defended systems of injustice in their varied forms. Even in his most pessimistic mood, King expressed hope that collective nonviolent action would avert national disaster, create a “new spirit of class and racial harmony,” and write “another luminous moral chapter” in US history.

Yet, over a half a century after King’s assassination, violence has become routine. Not only routine, but public, gruesome, callous, and spectacular. AR-15s used to murder children and destroy families. Their names and faces induce trauma, leaving one feeling helpless and impotent before the long and cruel tentacles of violence. We have come to accept it. We tick off numbers. Some elected leaders offer thoughts and prayers rather than concrete proposals to address the root causes of this widespread violence and yet the killing and the proliferation of guns continue.

On December 11, 2022, Augustana Lutheran Church in Chicago held a local memorial service on the tenth anniversary of the Sandy Hook elementary school massacre. The names have become a litany since then: Parkland, El Paso, Buffalo, Uvalde, Highland Park, and so many others. Parents wept as they spoke before pictures and memorials of their loved ones killed by gun violence. The mayor spoke of what more we can do. Ministers, a rabbi, state senators, and anti-violence activists all gave voice to the tragic and painful pervasiveness of violence in our society. My mind wandered to other reminders of violence: the active shooter posting on the wall at the local gym. Instructions in campus buildings on what to do and where to go in a matter of seconds. There is no safe space now.

And yet, mothers testified. Fathers cried and recalled. People named their dead loved ones, they told stories about them as if by giving voice to their memories they would prevent them from lapsing into anonymity and not-having-been. They invoked presences through their words and testimony. Though I recognized a few faces here and there, I felt like an intruder, as if I were someone who invades an intimate and sacred space reserved only for those who paid the price of entry through pain and loss, through their proximity to the grasping hand of death. Candle lights flickered. The mordant strains of violin strings that both haunted and comforted. So many spoken words that somehow seemed feeble precisely because of their superfluity. Yet, they were life to those who spoke them. It appeared that they invoked presences, rectified wrongs, condemned the pervasiveness of violence, and inspired hope all at once.

I attended this vigil as a member of the Anti-Racism Task Force of the Hyde Park-Kenwood Interfaith Council. I have had an interest in doing something to reduce violence in the local community long before my involvement with this task force. My book projects on race and religion inevitably require engagement with and discussions about violence. My forthcoming book, A Theology of Brotherhood, has an entire chapter devoted to one religious organization, The Federal Council of Churches, an ecumenical organization that tried to coordinate and organize Protestant churches. The book traces the FCC in its decades-long campaign against one of the most insidious and gruesome forms of violence: lynching. The features of the vigil described earlier were remarkably similar: the outrage, the memorialization, the numbers, and the critique of the nation and community that allows (and indeed encourages) this punitive and violent approach to social life. The long struggle of organizations like the FCC for social change (for over two decades in the anti-lynching campaign) preceded the major campaigns of the black freedom struggle in the 1950s and 1960s. Yet both remind us of the long, hard, and difficult struggle we face in our attempts at violence prevention. I harbor no illusions about the difficult work ahead.

In his final years, Martin Luther King began calling for a “revolution of values” in American society. He saw American society afflicted with the triple evils of racism, materialism, and militarism, urging the nation to move from its worship of things to a greater concern for persons. Unfortunately, the mass production of and profits from guns have only accelerated since King’s death. It is no wonder that King, amidst race riots, the war in Vietnam, and the ever-present threats of vigilante violence, insisted that the “philosophy and strategy of nonviolence become immediately a subject for study and serious implementation in every field of conflict.” He expressed this urgency after years of activism and social struggle. He was convinced of the necessity of nonviolence as a pragmatic solution to American violence, but he also urged this method as a religious solution to a problem of the human spirit.

King hoped that his fellow Americans would come to embrace an unconditional and abiding love for all humans. He wrote of nonviolence as the most potent and effective tool for personal and social transformation. King saw it as a tool of collective political and social reform and a process of personal, inner transformation. We have yet to live up to King’s dream and to heed his call for a revolution in values. More than ever, however, his willingness to sacrifice personal comfort for the good of others (present and future generations) and his insistent critiques of the insidious and progressive nature of violence are relevant to our contemporary moment. King’s practice of and call for love as a technique and discipline of personal and social transformation are especially worth revisiting. We must not become numb to this violence and allow it to become normal. Voices from the past like King’s continue to incite us to tenacious and urgent action against this sordid and shameful American reality. 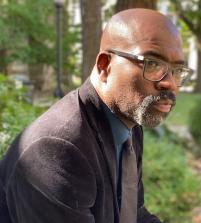 Curtis J. Evans is Associate Professor of American religions and the History of Christianity at the University of Chicago Divinity School. His first book, The Burden of Black Religion (Oxford University Press, 2008), was an historical analysis of debates about the role of religion in the lives of African Americans and the origins of the scholarly category of "the black church." His current book project is, A Theology of Brotherhood: The Federal Council of Churches and the Problem of Race (forthcoming, NYU Press). He has a PhD in the Study of Religion from Harvard University.