Loss and Continuation: Lessons from the Popol Vuh

An ancient Maya tradition on keeping those we've lost alive

Over 600,000 people in the United States alone have died of Covid-19 over the last year and a half. Some experts believe the actual number is closer to 900,000 in the US. Over 3.5 million people (also certainly a vast undercount) have died worldwide. This is of course in addition to all the other things that have taken people away over this period. The pain and loss felt by so many individuals and families—children, parents, siblings, friends—is immeasurable.

But the world carries on, things start anew, our past fades and dies. Or so we often think. But how can those who have experienced such devastating loss go on? How do we walk into the future with those we loved silenced forever? Such loss can feel like a piece of oneself has been torn away and destroyed. While we might go back to the office, return to sporting events and restaurants, and keep the economy going strong once again, our loss remains.

The traditional thought of the Maya (of current day Guatemala, Belize and southeastern Mexico) has much to teach us about dealing with this loss, by ensuring that our loved ones are ultimately not lost. Each of us is characterized by our essence, the core of what it is to be us. This essence is not manifest just through a certain body or features. Those are things that change even through one’s lifetime. One’s essence is more fundamental than this, but it is manifest through one’s characteristics, mental and physical. One’s essence, according to the Maya view, is not static or stuck within the bounds of the particular biological individual. It can be manifest in many places and many ways. When we construct a work of art or a text, for example, this manifests something of our essence. When we have children, or teach others, some of our essence is manifest in our children or students.

In the K’iche’ Maya text Popol Vuh, we find many examples of continuation of essence, particularly of the manifestation of ancestors in the acts and lives of their descendants. Early in the text, the twins One Hunahpu and Seven Hunahpu[1] are called to the underworld, Xibalba, because the lords of Xibalba are angered by their joyous playing of a ritual ballgame above their heads, in mockery of the lords of the underworld. All of this is clearly symbolic of our lives—in the strivings and activity of humanity, we continually resist and spite death, until finally death catches up to us and requires our sacrifice. The twins cannot escape their ultimate fate, as indeed none of us can, and meet their end in Xibalba. As the twins prepare to descend to Xibalba, where it is clear what will happen to them, their mother is distraught and in tears. The twins, trying to console her, say: “we must go, but we will not die. Do not grieve.”  This is not merely a noble lie to calm their mother, but expresses a deeper truth.

Though the twins ultimately do perish in Xibalba—they are killed, and One Hunahpu’s head is removed and placed in a calabash tree—they also do not die, because their essence is continued through their sons, the central hero twins Hunahpu and Xbalanque, born from a woman of Xibalba impregnated by receiving spittle from the head of One Hunahpu in the calabash tree. The head of One Hunahpu explains to the woman he impregnates the crucial message that the myth aims to express:

“My saliva, my spittle, is merely a sign that I have given to you. This head of mine no longer functions, for it is merely a skull that cannot work. The head of a truly great lord has good flesh upon his face. But when he dies, the people become frightened because of his bones. In like manner, his son is like his saliva, his spittle. He is his essence. If his son becomes a lord, or a sage, or a master of speech, then nothing will have been lost. He will go on, and once more become complete. The face of the lord will not be extinguished nor will it be ruined. The warrior, the sage, the master of speech will remain in the form of his daughters and his sons.”

The Popol Vuh teaches us that our lost loved ones, the ancestors, descendants, and those who have touched us are always potentially within us. They are not just there in a causal sense, nor do they manifest all the time. We often say that we carry with us those who had impact on our lives. But the Maya view goes beyond this. The essence of a person or a thing must be activated. All of us have the potential to manifest those whose essence touched and created effects on our own, but we do not always actualize this potential. It can be wasted, ignored, buried away, forgotten. We can let our loved ones disappear. When we forget them and go back about our lives as if they’d never been, we let them disappear—or rather, don’t recognize and fully manifest the way in which they are always present.

Who were they? Who are we? Who are we if not them, those we have lost? Then how can we better reflect them, make them live again, manifest them, allow them to truly live again? It takes work—learning, memory, and practice. Commitment. We have to put aside time for it, for them. This takes away time for us. It involves sacrifice (another important virtue in Maya thought). This is something stressed by the Popol Vuh as well: We do not keep essences alive for free. We must constantly reflect and align ourselves, strive to follow the way of those we have lost, to ensure their essences remain active. The fact of biological relatedness alone, for example, is insufficient to manifest the essence of others. Nor is biological relatedness necessary—our lives can be touched and molded by people who are not biologically related to us as much as they can be by ancestors. The continuity of essence only happens through effort, as One Hunahpu explains. It is a project. We often find the features or actions of ancestors revealed in our own. We or someone close to us might recognize a particular gesture or behavior of ours as identical to that of a long gone ancestor. This is the seed of essence, but not yet fully essence. We must integrate such a feature into a coherent project, performing it in a socially accessible way. We thus become to the world and the community, at least for some time, what this ancestor was. The commanding tone of voice one inherits from an ancestor who was an orator, for example, does not in itself manifest this ancestor. But when one employs this voice to inspire the community as their ancestor did, then the ancestor’s voice returns, the ancestor’s essence is manifest once again.

When we act, we don’t act only for ourselves; we  represent all those who framed and shaped us—our ancestors, friends, teachers, those who made us what we are. Our responsibility to them is not merely a kind of stodgy obligation, but also a way to literally keep them alive. We ourselves hold the power to ensure that no virus, accident, or illness can take them away. Insofar as we can fulfill this responsibility, our loved ones will not be lost, extinguished, or ruined. They will continue.

[1] The numbers one and seven signify origins, and we find a number of characters in this text, dealing largely with creation, with names including these numbers.

Photo: Maya sacrifice to the gods in the cemetery of Chichicastenango, Guatemala (Ralf Steinberger). 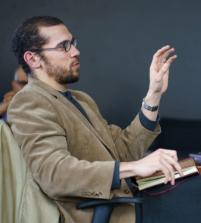 Author, Alexus McLeod, is Professor of Philosophy and Asian/Asian American Studies at the University of Connecticut. His research focuses on the global history of philosophy, spanning across traditions including early Chinese, Indian, and Maya philosophy. His most recent book is The Dao of Madness: Mental Illness and Self-Cultivation in Early Chinese Philosophy and Medicine (Oxford, 2021).

See All Articles by Alexus McLeod