A Legal Perversion of Justice

Breonna Taylor's death and the lawlessness of law and order

2 How long, Holy One, shall I cry for help,
and you will not listen?
Cry to you “Violence!”
and you will not save?
3 Why do you make me see iniquity
while you regard trouble?[1]
Destruction and violence are before me;
there is legal[2] disputation and it[3] elevates contention.
4 So the legal system[4] becomes ineffective
and justice never comes forth.[5]
The wicked surround the righteous;
therefore, judgment comes forth perverted.

Breonna Taylor, a Black woman sleeping in her bed, was shot and killed by a white police officer who burst into her home on what is now regarded as an improper warrant. Thinking they were being robbed, her boyfriend, Kenneth Walker, fired his legal and licensed weapon in self-defense, which the police used as justification for killing her and wounding him. The verdict in the case against the officers found that, as long as someone—in this case a person outside of their home, after repeated questioning and several different responses—said that he heard the police identify themselves, then the shooting was justified, no matter that Breonna and Kenneth did not. On September 23, 2020, the white police officers were charged for firing through Breonna’s wall into the neighboring apartment occupied by a white family (but not for endangering a neighboring Black family). There were no charges filed for the actual killing of Ms. Taylor. Her killing was ruled legal and justifiable.

Breonna Taylor’s killing was legal in an ineffective judicial system which perverts the justice it holds captive; or, the legal system functioned effectively as designed, having not been designed for the protection for the descendants of the enslaved. The contemporary prophets who cry out to human and divine judicial entities “How long?” are the members of the Black Lives Matter movement and the movement itself. Unbidden, unsummoned, they prophesy with their feet and bodies, art and sermons, prayers and curses.

Unbidden, unsummoned, Habakkuk prophesies to God about God. The superscription that credits this work to Habakkuk portrays it as a prophetic form, a burden-oracle, משא, masa’, that he envisioned, חזה, chazah. Yet in his own words, the poet-prophet of the volume’s content initiates contact with the Divine, unbidden, unsummoned. Previously, I have defined prophecy as “the proclamation and/or performance of a divine word by a religious intermediary, to an individual or com­munity…at the instiga­tion of humans or divinities.”[6] Habakkuk’s word to God is his own word, yet it is a divine word – and in good company. The prophecies of Amos are presented in the first verse as “the words of Amos,” not as the words of God in its superscription; similarly, Obadiah’s vision is named as his own in its first verse.

Habakkuk, whom I regard as an “unlikely proto-womanist protagonist,” [7] calls out God (more than calling out to God) in response to the violence to which his people are subject. Without preamble, he cries out, “How long? How long are you going to sit by and do nothing as my people are slaughtered? You are not even listening to me, to us. We are beset by violence and you are doing nothing to save us.”

Habakkuk cries “Violence!” As I have argued elsewhere, his meaning is very specific:
"Unlike some of the other vocabulary for oppression that can take many forms of violence, including social, political, and economic, חמס [hamas] refers explicitly to physical force causing injury or harm. The threat from unchecked violence is immediate, disabling, and potentially lethal. Habakkuk and his community are in crisis, crying out to God, and God is silent. Habakkuk’s cry and the context from which it emerged are resonant with generations of the faithful across millennia: from enslaved Israelites to enslaved Africans in the Americas, and from Jews being hunted and slaughtered by Nazis to Muslims, Christians, and Yazidis…"[8]

Boldly in verse 3, Habakkuk charges God with making him watch the victimization of his people. “Speaking truth to power” has become a contemporary proverbial definition of prophecy. Habakkuk speaks his truth to the ultimate power in the universe and then without waiting for a response, pronounces his own judgment. The prophet finds that it is the law, the legal system, that has not simply failed but been twisted or perverted. Left unsaid is who has corrupted the law. The law, though revealed from Sinai's height, is entrusted to humanity to execute faithfully and justly. As Supreme Court Justice Ruth Bader Ginsburg reminded herself tangibly with a piece of embroidery on her judicial garments, “צדק! צדק! תרדף. Tzedek! Tzedek! Tirdof. Justice! Justice! You must pursue.”[9]

Breonna Taylor’s legalized killing was unjust. And like Habakkuk, I want to know what God and the corrupted legal system are going to do about it. Later in the passage, the Divine rolls out their response to the prophet’s cry and the reason for it in 1:5-11. And as is the case with contemporary BLM prophets, Habakkuk is neither convinced nor comforted by the policy decisions of the one to whom he has taken his protest. In chapter 2, the prophet says that he will watch to see what God will do; he does not give his trust easily.

Habakkuk has good reason to trust the One responsible for justice for his people. The book ends with a psalm of praise for God’s faithfulness, Habakkuk chapter 3. Black folk have no such reason to trust those responsible for granting us justice. In fact, it is still arguably the case that the American justice system is not for us. Policing—the militarized arm of American society writ large, and the judicial system in particular—is adversarial, hostile and, lethal to Black folk by design from its very founding in the form of slave-catching patrols. How long, Holy One, how long? Breonna Taylor’s death was followed by that of George Floyd and, within a week of this writing, that of Jonathan Price. How long? Not yet.

[1] The Divine is clearly the subject of the second person singular Hiphil verb. Cf: JPS and Robert Alter, The Hebrew Bible: A Translation with Commentary. New York: W. W. Morton and Company, 2019. In addition, there is no object to facilitate traditional translations (KJV, NRSV) “[God] makes me regard trouble.”

[3] The third person singular ישא, yissa, “lift/elevate” follows the noun מדון, madon, “contention;” this inverts the traditional syntax, though such inversion is by no means uncommon. However, in this case, the question remains as to whether “contention” is subject or object, rendering the phrase “disputation elevates contention” or “contention is elevated.” Further, the parallel form of Hebrew poetry would suggest that the second phrase be a complete unit with its own subject and verb. Yet, given ישא is an active verb (Qal), the latter is unlikely. In general, such confusion is resolved by את, ’t, the direct object marker; however, given that the direct object marker is not required, I read “contention” as the object of ישא.

[4] “Torah” here functions as the judicial system, hence JPS “decision” and the parallel with “justice/right judgment” in the following phrase.

[5] The use here of יצא, ytz’, the primary verb of the Exodus migration, invites us to consider the torah-as-legal-system as enslaved. 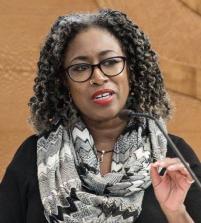 Author, the Rev. Wil Gafney, is Professor of Hebrew Bible at Brite Divinity School in Fort Worth, TX, and is the author of Womanist Midrash: A Reintroduction to the Women of the Torah and of the Throne, a commentary on Nahum, Habakkuk and, Zephaniah in the Wisdom series, and Daughters of Miriam: Women Prophets in Ancient Israel. More information about her research is available on her website, and some of her works are available here.

See All Articles by Wil Gafney