Islamo-Leftism and Hope, Faith, and Charity in Modern France

Let us begin by refreshing our memories—although all of this is quite the opposite of refreshing. This now long-lasting polemic started all over again when the French Minister of Research Frédérique Vidal requested that the CNRS (Center of National Scientific Research) make an inquiry into how many French scholars were working on “racial topics” in the vein of so-called “Islamo-leftism.” Immediately, the CNRS politely declined the ministers’ offer, making clear that the expression “Islamo-leftism” had neither any objective content nor scientific value and putting an end to the request. This is a rapid sketch of what happened. But one has to figure out how profound was the scandal that followed in France: for roughly two weeks numerous scholars from humanities departments (including myself) wrote in every newspaper to state their disapproval towards Vidal’s request and also to phrase objections towards her use of the very biased word “Islamo-leftism;” the word was coined by writer and provocateur Éric Zemmour, who regularly incites the French public with incendiary opinions and has been regularly condemned by the French judiciary over the past ten years.

But the polemics did not end with a debate on the semantics of “Islamo-leftism” and the reality it purportedly designates. Here are the latest developments. The president of the UNEF (the biggest union of students in France) stated in an interview that they were holding meetings to discuss discrimination that were restricted to ethnic minorities. She spoke clumsily, without at first clarifying that such meetings were occasional “talking groups” for providing support and were not representative of all the UNEF’S meetings. Yet it was too late; the soundbite gave cover to the subsequent accusation that the UNEF was an “Islamo-leftist” movement—in other words, a racist organon hostile to white people and making propaganda for “Islamism.” While the UNEF was careless and imprecise in its communication, the word “Islamo-leftism” is not only devoid of meaning, but profoundly dangerous. The result? By playing constantly with polemics, I fear that my country will finally be at war—which is exactly what talking heads like Zemmour want.

Let’s take a step back, however: in these two versions of the story, one can see the entanglement of the question of religion and “race”. Both sides, while far from equivalent, are playing with fire by constraining the debate to the accusations of racism they bring against each other. Let us recall here that CNEWS, the channel on which Zemmour has his daily show, has just been condemned to pay 200,000 euros by judicial order because Zemmour said that “young migrants were all rapists, thiefs, murderers…” and so on. Is the UNEF truly racist and Zemmour a racist too? The latter is surely both a racist and a xenophobe, because he is making constant hierarchies between “races” and because he hates that people do not stick to so-called “French identity”—that is for him, a mix of “gaulois”, “blanquette de veau ” and “Louis XIV’s heritage”. The UNEF, on its side, is reacting to Zemmour’s view by putting on stage veiled women as often as possible, in order to further provoke the Zemmourians. Each camp is responding to the other by using “laïcité,” the French legal principle of secularism: the UNEF to say that laïcité protects them, Zemmour to say it’s on the contrary a violation of laïcité. But what, we might ask, has laïcité to do with all this?

I wonder whether laïcité, being constantly invoked as a medicine to cure all this anger, is not the real problem involved. Indeed, laïcité is at the same time the shield and the weapon used by all sides to justify themselves, which means that the concept is currently rendered inefficient, if not deleterious, to public debate in France. Laïcité is the tree that hides the forest: namely, identity. I would say that neither colonialism nor feudalism nor laïcité are the problem. The problem lies in French romanticism: that is, the national relationship to the past which is profoundly nostalgic and tinged with melancholy, two affects that are very dangerous when used at a high level and in a political fashion, because they sacralize the past.

Hence, the irony is that the self-declared most secular country in the world is in the situation of being in need of a theological virtue: hope — that is what’s left to those who are or feel miserable. I think Zemmour is not very concerned in spiritu  by either the “holy” or by any sense of “sacred” except of the cult of his own idealized ego. On the other hand, one could say the UNEF idealizes itself by putting oneself in the posture of combating Zemmour by reciprocal provocations. Vanitas vanitatum, omnia vanitas. The despair brought on by the impasse of this culture war will not go away with jabs of increasing vitriol from each side, but will only give way to the hope for, and trust in, an as-yet unimagined and unimaginable future that might break through.

I am thus likewise very concerned by the lack of another virtue in public debate: that is, charity, which might or might not be from supranatural origins, but which has very concrete effects when practiced. Unfortunately, I fear the French public debate has never been so far from charity, in its mind, body and soul. So even more ironic is the fact that faith is perhaps the last theological virtue that is left to France to sort out all her issues, since the cardinal virtues of courage, prudence, justice and moderation have all left public debate.

Charity, Hope and Faith… Well, if modern France is no “islamo-leftist” country, it is not as secular as expected . But it’s still the country where debates are the fiercest regarding the meaning of words. It is therefore urgent to clarify the meaning of laïcité and to recall Fortitudo, Prudentia, Justitia and Temperantia to do so. That would be a good start for a country that longs for secularism and that has for too long idealized itself.

Photo: Éric Zemmour arriving at the criminal court in Paris on November 6, 2015, where he was prosecuted for incitement to racial hatred. (Bertrand Guay | AFP) 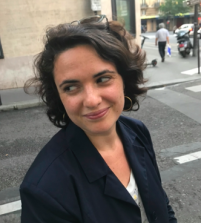 Author, Loriane Lafont, is a PhD Candidate in Romance Languages and Literature. She is doing her doctorate in co-tutelle with the École Pratique des Hautes études in Paris. Her work has appeared in the French newspaper "Le Monde," and her dissertation is entitled "Literary practices and religious systems of thoughts : for an archeo-genealogy of literary texts."

See All Articles by Loriane Lafont