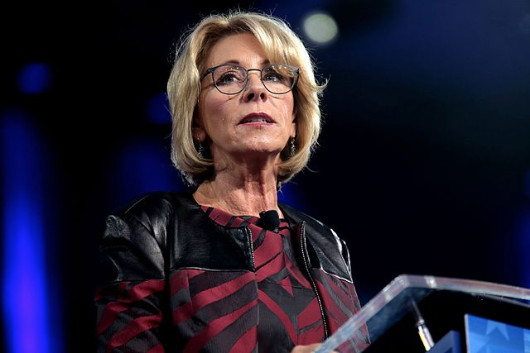 Secretary of Education Betsy DeVos favors the injection of a conservatively religious, most likely also corporate, evangelical influence into American educational politics. But the question of what exactly that means digs deeper than just the mere presence of religion in American education through the promotion of vouchers and expansion of charter schools. By sidetracking funds from public education, a shadow system of privately run schools is created that undermines the flourishing of a once viable national public school system. For a long time that public system served this country well as a social and religious equalizer, allowing immigrants from different backgrounds to assimilate as American citizens.

“Assimilation” may be the key term here, and the concept most resisted by DeVos. For what it stands for in her eyes is not a neutral education but a normative (read: liberal) set of values that clash with the religious beliefs of parents. To her, the latter’s voices outweigh any government responsibility.

This religious principle, lying at the heart of DeVos’s educational advocacy, is to a large extent the product of a long 19th-century Dutch political and religious debate. As in the Netherlands, it could lead to a demand that religious education be subsidized through public funds, which would be a novelty in the American educational system. Growing up in the Christian Reformed Church in Western Michigan and attending Calvin College, Betsy DeVos was heavily influenced by Abraham Kuyper (1837-1920), an early Dutch advocate of “Schools with the Bible.”

When first introduced in the Netherlands in 1917, Christian, so-called “special” schools—they are not called “private” because they are publicly funded and hence seen as part of the public institutional landscape—were a novelty as well, the result of a long political battle instigated by Kuyper. Kuyper was a Reformed, neo-Calvinist minister and politician who broke away from the Dutch Reformed Church in 1869; founded the nation’s first political party, the Anti-Revolutionary Party (ARP), in 1879; created the Free University in Amsterdam in 1880; and became prime minister in 1901. In 1980 his party merged with other confessional parties to form the Christian Democratic Party, while his church reconciled, or rather merged, with the Dutch Reformed Church in 2004 to form the Protestant Church in the Netherlands. Hence his most tangible legacy may well be the network of publicly funded special, i.e., Christian, schools. It is so successful that, with less than half of the Dutch population currently claiming to be religiously affiliated, about 70% of Dutch children still attend Christian schools.

How did this system come about, and why does it persist? Throughout the 19th century, as the Netherlands recovered from the impact of the French Revolution and tried to build a nation that was “one and indivisible,” the church played an important role in channeling the people’s religious and nationalist sentiments. But the Protestant church was considered too distant and formal, while the restoration of the Catholic hierarchy in 1853 fueled the nation’s dormant anti-Catholicism. The emerging religious and political debates masked a deep underlying tension about the role of the Dutch nation, whose Eighty Years’ War of Independence (1568-1648) was seen as closely tied to the Reformation, and whose freedom and identity were considered inherently Protestant. Guillaume Groen van Prinsterer, an important 19th-century politician who steadfastly opposed the liberal Johan Rudolph Thorbecke, author of the 1848 Dutch constitution, wrote in support of an early secessionist movement from the Dutch Reformed Church, some of whose adherents left in the mid-1840s for Michigan; there they later formed the Christian Reformed Church, in which Betsy DeVos would grow up. Groen’s early warning against the semi-established Protestant church was that such tensions might spill over into the political arena. Driven by his “anti-revolutionary” and “Christian-historical” agenda, he advocated for Protestant schools with government funding, and when denied, insisted on neutral schools that offered no religious education and also made no reference to national history.

The fortune of Groen’s failed legislative agenda changed when Kuyper, energized by another denial of government funding for Christian education at public schools, founded the ARP. He uprooted the political landscape by prioritizing the charismatic bond between leader and constituents. Still, it was not until the First World War, in which the Netherlands was neutral, that the ARP and other confessional parties succeeded in what became known as the Pacification of 1917. This Pacification, further aided by the threat of a socialist revolution, consisted in a unique trade-off by which the left (social-democrats and liberals) gained universal suffrage—first only for men, soon after also for women—and the right (confessional parties) achieved their goal of founding Christian schools with government funding.

Instrumental in winning this drawn-out battle were two central Kuyperian concepts. First, the notion of common grace, the neo-Calvinist version of natural law, by which God has ordered creation for all to work in and enjoy. This is a moral exhortation for Christians to be active in the public realm. The second is sphere sovereignty, the notion that life is an organism consisting of different spheres, in which different constituencies each play their own part without government interference. Kuyper gave an address on sphere sovereignty at the opening of the Free University in 1880. But only in 1917 did he succeed in gaining the government’s endorsement for a systemic educational change. A new educational system was put in place, anchored in article 23 of the Dutch constitution, which grants freedom of education, meaning that in the educational sphere different constituencies can each found their own schools at the government’s expense.

While I am no longer in favor of the Dutch system due to its lack of credible representation, the fact that it is publicly funded has allowed for full accountability as well as facilitating useful government pushback against religious extremes. Special schools can no longer discriminate against teachers based on gender or sexual identity. Also, a recent committee has designed a national canon setting standards for historical education. It highlights universal suffrage, but does not mention special schools. Nevertheless, with an appeal to their board, special schools can still refuse to admit Muslim students wearing headscarves, and failing inner-city schools are too often public schools. While it is clearly time for an update of the Dutch system, I would strongly counsel Secretary DeVos and the U.S. to refrain from going down the long and winding Kuyperian road.

- The Dutch canon (in English) can be found at http://www.entoen.nu/en.

- Monsma, Stephen V., and J. Christopher Soper. The Challenge of Pluralism: Church and State in Five Democracies (Rowan and Littlefield, 2009): 51-91.

- Rooy, Piet de. A Tiny Spot on the Earth: The Political Culture of the Netherlands in the Nineteenth and Twentieth Century (Amsterdam University Press, 2015).

See All Articles by Willemien Otten