Religion and the Core 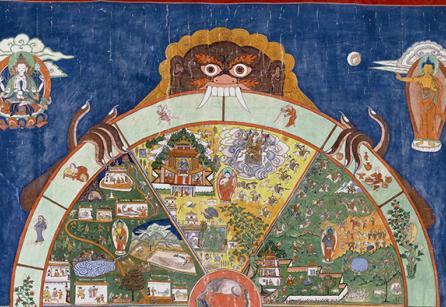 Painted textile, 'thang-ka'. Religious subject with the wheel of life. © The Trustees of the British Museum.

The Divinity School is pleased to announce the creation of a new sequence in the College Core titled “Religion: Cosmos, Conscience, and Community.” The new sequence makes it easier for undergraduates to study religious topics in-depth while meeting a requirement for graduation. The sequence is proving to be more popular than anyone anticipated, with five sections in its first year of existence.

"The new Core program is really one of the most exciting things we’ve done in many years,” says James Theodore Robinson, Interim Dean of the Divinity School. “The students will be exposed to a very large and varied curriculum drawing sources from many, many different historical and religious traditions.”

Every undergraduate student at the University of Chicago takes a yearlong course sequence in the social sciences. In each sequence, students are introduced to key texts in social theory and gain skills in close reading, argumentation, and analysis. Students can choose from eight different sequences. The new sequence is the first to focus specifically on religion and its roles within society.

“Thinking about religion has always been a part of the social sciences at UChicago,” says Russell Johnson, Assistant Director of the Religion Core, “but this is the first sequence centered on how religious narratives and rituals shape people’s perceptions of the world around them.”

Planning for the sequence began over a year ago. Nine faculty members met regularly over Zoom to discuss the central questions and themes that would unite the three quarters. These professors represent an impressive range of areas of expertise, and they work in history, anthropology, cultural theory, ethics, literary studies, gender theory, philosophy, and theology. Over several months, they worked together to develop courses that are more global in their scope than in other Core sequences, assembling texts from ancient China to medieval Spain to contemporary Iran.

In the fall quarter, students look at myths and creation stories, examining how religious narratives simultaneously reflect existing social assumptions and create frameworks through which people understand their lives and communities. In the winter quarter, students look at religious responses to suffering, testing Sigmund Freud’s theory that religion is primarily a matter of “wish-fulfillment.” Finally, in the spring, students discuss the political dimensions of religion, reading selections from Marx, Gandhi, Al-Farabi, and Dorothy Day, among many others. Though students do not need to have any prior knowledge about religion in order to succeed in these courses, students will explore how the study of religion intersects with fields like psychology, anthropology, and economics.

"One of our central goals in developing the Religion Core,” says Alireza Doostdar, Associate Professor of Islamic Studies and the Anthropology of Religion, “has been to help students think about religion in critical terms aided by the methods of the social sciences, but also to get them to see how religious thinking can speak back to, complicate, and revise our social scientific frames of mind.”

Read more about our Undergraduate Program in Religious Studies, in which College students can pursue a major or a minor, or explore some of our undergraduate courses.