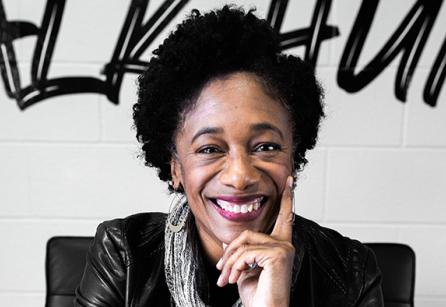 The Divinity School is pleased to offer a public lecture by Korie Little Edwards: "Clergy and Racial Justice in a Diverse World."

Dr. Korie Little Edwards is Professor of Sociology at The Ohio State University. She is a leading scholar of race and religion in the United States. She has written several books and articles on multiracial religious organizations. These include The Elusive Dream: The Power of Race in Interracial Churches (author, Oxford University Press) and Against All Odds: The Struggle for Racial Integration in Religious Organizations (co-author, New York University Press). Dr. Little Edwards’ current scholarship focuses on matters related to race and religious leadership. Her book,Smart Suits, Tattered Boots: Black Ministers Mobilizing the Black Church in the Twenty-First Century (co-author, New York University Press), examines black religious leaders’ engagement in the 2012 election to understand their civic and political participation and mobilization in today’s America. Estranged Pioneers: Race, Faith and Leadership in a Diverse World (co-author, Oxford University Press) is in production. Little Edwards is also Past President of the Society for the Scientific Study of Religion, an international, interdisciplinary association (www.sssrweb.org), and Editor-in-Chief for the Journal for the Scientific Study of Religion. She has directed or co-directed several funded research projects totaling more than 1.75 million grant dollars.  This includes the Religious Leadership and Diversity Project (RLDP), the most in-depth, comprehensive study ever conducted on religious leaders of multiracial congregations. Finally, Little Edwards is the co-host of The Elusive Dream Podcast.

She can be found online at korielittleedwards.com or on Twitter as Gods_Peace1.