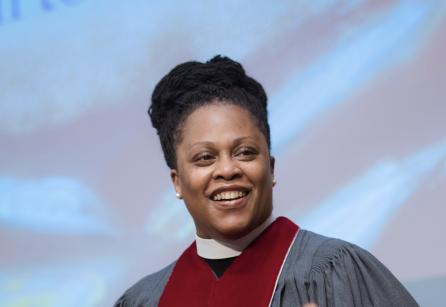 The Rev. Kirstin Boswell-Ford has the kind of cosmopolitan background and burnished university career to make even the most blasé take notice.

Growing up, she lived on several continents, toiled in the corporate world before studying in the Master of Divinity program at the University of Chicago Divinity School, and later served as the director of operations for the International Association of Black Religions and Spiritualities, organizing programs for enhancing awareness of indigenous religious communities across the globe.

Yet even today, more than a year into her job as chaplain at the Massachusetts Institute of Technology and director of MIT’s Office of Religious, Spiritual, and Ethical Life, Boswell-Ford says she often finds herself looking back on her time at the Divinity School.

She earned her MDiv degree from the Divinity School in 2006, and the following year she began pursuing a doctorate through the school’s PhD program, in the anthropology and sociology of religion, or ASR, area of study. By 2011, when Boswell-Ford moved from Chicago to Massachusetts to work at Bentley University, she had finished all PhD requirements except for her dissertation.

“It was just an amazing time for me, and amazing doesn’t always mean positive,” she says. “It was difficult, it was challenging, it was gut-wrenching, it was supportive. It was all of those things combined, and I think that’s why it was so formative for me.”

Her decision to enter divinity school came during a period of soul-searching, when Boswell-Ford was in Iowa working as an executive in the corporate world. “It was an intense and personal period of discernment, of really trying to figure out where I felt that I was called vocationally,” she says.

A painful divorce around the same time forced Boswell-Ford to defer her attendance at the Divinity School for a year before she finally pulled up stakes and moved to Chicago.

Despite the upheaval in her life, Boswell-Ford embraced the school’s emphasis on rigorous academic studies, along with her ministry preparation in the MDiv program. After earning her MDiv degree, she briefly pursued a PhD in the University of Chicago’s Department of Comparative Human Development before returning to the Divinity School to seek her doctorate in ASR. Her dissertation is on identity and identity formation among African-American clergywomen and their relationship with the traditional black church.

“I felt like I had the space and the support to really delve into developing myself, not just academically, but really figuring out who I was and what I felt called to do,” says Boswell-Ford, who was ordained in the American Baptist Churches USA and has served congregations in that denomination and also in the United Church of Christ. She says she considers American Baptist her primary denominational affiliation, but that “personally, I would say that I’m still on a tremendous journey.”

At the University of Chicago, Boswell-Ford met theology professor Dwight Hopkins, a mentor with whom she collaborated in work for the International Association of Black Religions and Spiritualities, or IABRS. For several years, Boswell-Ford was director of operations for IABRS, during which she developed educational platforms and conferences on and for indigenous religious groups, including aboriginal Australians, the Burakumin community of Japan, and indigenous Hawaiians.

“It was just so wonderful to be able to once again have my outlook and my vision expanded to include people from all over the world,” Boswell-Ford says.

Her global worldview and inquisitive nature have served her career since leaving Chicago for the East Coast eight years ago. After serving as chaplain for the Protestant community at Bentley in Waltham, Massachusetts, she next worked as associate university chaplain at Brown University, before becoming the MIT chaplain in 2017.

At MIT, Boswell-Ford provides care and support to the campus, including to students without religious affiliations. And as director of the Office of Religious, Spiritual, and Ethical Life, she says, she hopes to use the talents and the devotion of the staff to build the office into a world-class operation that supports the research and initiatives of MIT students and faculty.

“My goal here is to push this notion of wholeness, that we are our minds, and we are also our spirits and our hearts and our bodies,” Boswell-Ford says. “We’re all interconnected in the work we do.”