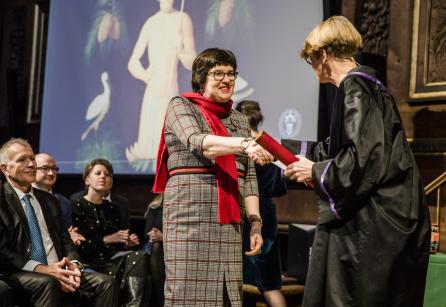 Willimien Otten has been awarded an honorary doctorate from Københavns Universitet (University of Copenhagen), Denmark. Honorary doctorates are awarded to a number of researchers who have played a significant role in research or education and re the highest academic accolade that the University confers without the recipient first having defended a doctoral thesis in Denmark.

Otten, Professor of the History of Christianity and Theology and Director of the Marty Center for the Public Understanding of Religion, studies the history of Christianity and Christian thought with a focus on the medieval and the early Christian intellectual tradition, especially in the West, and an emphasis on the continuity of Platonic themes. She has worked on the Carolingian thinker Johannes Scottus Eriugena and on twelfth-century humanistic thinkers including Peter Abelard. She analyzes (early) medieval thought and theology as an amalgam of biblical, classical, and patristic influences which, woven together, constitute their own intellectual matrix. Within this matrix the place and role of nature and humanity interest her most.

The University of Copenhagen was founded in 1479. Ever since, the University has celebrated its foundation with an annual commemoration. The commemoration is always held on the third Friday in November with participation from the Royal Family. Over 700 guests are invited – representatives of the University's employees and students, of research councils, funds, ministries and other close partners as well as the University's different prize winners, appointed doctors and honorary doctors of the year.