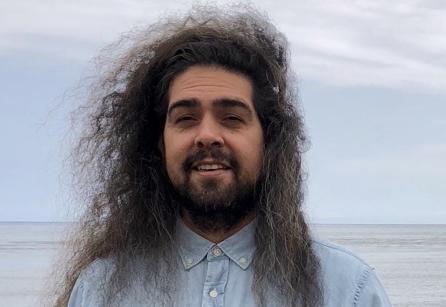 Join us for a public lecture by Matthew W. Harris: "Black Metaphysical Religion and the Art of Being Somewhere Else"

Drawing on the archive of the avant-garde musician Sun Ra, this talk brings into focus the intellectual and institutional outlines of Black Chicago’s metaphysical religious culture. I ground Sun Ra’s celebrated outer space aesthetics in the traffic in the occult. I show that his “music of the space age” emerged from and extended Black Chicago’s metaphysical cultures, mobilizing its sources and infrastructures into a distinct, otherworldly aesthetic idiom. While gospel would emerge as the vernacular sound of Black sacred music in the wake of the Great Migration (and thus in the popular and historical imagination), I attend to Sun Ra’s brand of grassroots religious utopianism outside of the churches, in nightclubs, and offer a different sense of Black religious study, space, and sound. And, ultimately, given this history and Sun Ra’s simultaneous iconic place in the Black Radical Tradition, I argue for a rethinking of the relationship between Black religion, religious studies, and the refusal to take one’s place.

Matthew M. Harris is a Ph.D. candidate in the Department of Religious Studies at the University of California, Santa Barbara. His research is situated at the intersection of African American religious history, Black radical traditions, and the politics of culture. His current project is a religious history of how outer space became the place of Black freedom dreams in the twentieth century and has been supported by the Ford Foundation; the UC Consortium for Black Studies in California; and Columbia University’s African-American Center on Religion, Sexual Politics, and Social Justice.