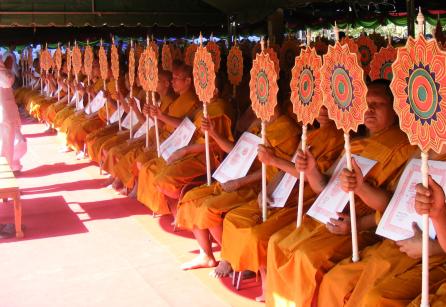 Join us for the next Jun Zhou Lecture in Theravada Buddhism:  “Buddhist-inflected Sovereignties Across the Indian Ocean: A Pali Arena, 1200-1550, "delivered by Anne M. Blackburn, the Old Dominion Foundation Professor in the Humanities and Chair of the Department of Asian Studies at Cornell University.

The lecture will be October 13th, 4:30pm, in Swift Hall's Common Room.

Based on Blackburn's new book, this talk presents case studies from locations in what are now Sri Lanka, Burma, and Thailand, and draws larger historical and methodological proposals from these cases.  The lecture highlights varied and historically specific sovereign arguments, made in multiple media, by participants in the premodern Pali arena (13th-16th centuries).

Professor Blackburn studies Buddhism in South and Southeast Asia at the intersection of Buddhist institutional history, literary studies, intellectual history, and political economy, with a particular interest in Buddhist networks (literary, monastic institutional, political, and trade) linking Sri Lanka and mainland Southeast Asia before and during colonial presence in the region. Her publications include Buddhist Learning and Textual Practice in Eighteenth-Century Lankan Monastic Culture (Princeton, 2001), Locations of Buddhism: Colonialism and Modernity in Sri Lanka (Chicago, 2010), "Buddhist Connections in the Indian Ocean" (JESHO, 2015), and "Buddhist Technologies of Statecraft  and Millennial Moments," (History and Theory, 2017). Research towards her current book project, Making Buddhist Kingdoms Across the Indian Ocean, 1200-1500, was supported by an ACLS Fellowship.

Her work broadly concerns contemporary Buddhism in Thailand, where she has lived and conducted research for over eight years. Further interests include global Buddhism, religions of Southeast Asia, gender in Asian religions, and religious tourism. Previous research has explored the modern vipassana meditation movement in Thailand’s international meditation centers and tourist encounters with Buddhism in Northern Thailand. Her current research focuses on monastic scandals and the monastic body within Thai Buddhism. She is also writing a book on contemporary, lived Theravada Buddhism in Southeast Asia.

Blackburn received her MA and PhD from the University of Chicago, mentored by Frank Reynolds in a program shaped by historical sociology and hermeneutics. Her secondary supervisor at Chicago, Steven Collins, conducted research in Buddhist Studies and South Asian Studies, working with great originality at the intersection of historical sociology, philosophy, and the study of Buddhist literature in Pali. In her research, Anne Blackburn works at the intersection of Buddhist institutional history, political economy, intellectual history, and literature. She focuses on intellectual-political centers in what is now Sri Lanka (formerly Lanka) during the 2nd millennium A.D., and networked nodes across the Indian Ocean in what are now Burma and Thailand

The Jun Zhou Lecture Series, supported through a generous gift by Mr. Jun Zhou, allows the Divinity School to offer a series of lectures on topics in Theravada Buddhism.

For more about the study of Buddhism at UChicago, please visit our Buddhist Studies page.