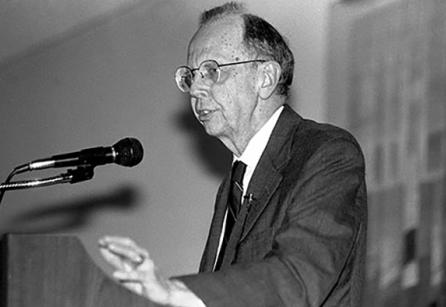 James Moody Gustafson, alumnus and former faculty member of The Divinity School, died on January 15, 2021 at the age of 95.

The son of a minister, James Gustafson served in Burma and India in the Army Corps of Engineers before pursuing higher education. He received a BS from Northwestern and a BD from Chicago Theological Seminary. He then went on to earn a second BD (in 1951) at The University of Chicago before moving to Yale University for his PhD. Ordained in the United Church of Christ, Dr. Gustafson served as a pastor for several years and also as the assistant director of a Carnegie Foundation funded study of Protestant Theological Education in America, then directed by H. Richard Niebuhr.

In 1972 Prof. Gustafson joined the faculty of The University of Chicago as a professor of theological ethics in the Divinity School and a member of the Committee on Social Thought. He taught at The Divinity School for some sixteen years. A beloved teacher, he guided many students during his years at the Divinity School, among them current faculty members Kristine A. Culp, Richard B. Miller, and William Schweiker. In 1988, Gustafson became the Henry R. Luce Professor of Humanities and Comparative Studies at Emory University. Before retiring from Emory in 1998 after 43 years of teaching and research, he became Woodruff Professor of Comparative Studies and of Religion.

Professor Gustafson’s work was wide ranging in its concerns; he had interests not only in theology and ethics but in science, medicine, and more. He authored twelve books, co-authored and edited several more, and published scores of articles in journals in the United States and abroad, mainly in the areas of theological and applied ethics. The Society of Christian Ethics recognized these multiple achievements in awarding Professor Gustafson its inaugural Lifetime Achievement Award. A Fellow and officer of the American Academy of Arts and Scientists and a two-time Guggenheim Fellow, Professor Gustafson also received more than ten honorary degrees, including from Uppsala University in Sweden.

William Schweiker, the Edward L. Ryerson Distinguished Service Professor of Theological Ethics, was one of Professor Gustafson's doctoral advisees. He said that "Professor Gustafson was an internationally recognized leader in Christian theology and ethics and a consummate doctoral advisor who educated generations of renowned and field-defining scholars, including some of my colleagues. Through his magnum opus (Ethics from a Theocentric Perspective), Gustafson continues to shape work in theological ethics and also the theory of religion, environmental ethics, and the place of the emotions in the religious and moral life."

James Gustafson was preceded in death by his wife, Louise Roos Gustafson. He is survived by four children, as well as six grandchildren. The family asks that memorials be directed to the Roadrunner Food Bank in Albuquerque, New Mexico.

James Gustafson played an animating role in the history of our School, as well as of the field of Christian ethics and more generally in contemporary thought. We send our condolences to the Gustafson family, and join them in their sorrow.