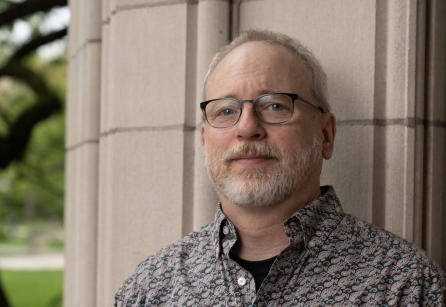 The classroom has long been the foundation of a transformative University of Chicago education. This past year, however, students have found inspiration even without traditional classroom settings—guided by faculty who have navigated unusual circumstances with empathy, curiosity and a spirit of collaboration.

The University annually recognizes faculty for exceptional teaching and mentoring of undergraduate and graduate students through the Llewellyn John and Harriet Manchester Quantrell Awards, believed to be the nation’s oldest prize for undergraduate teaching; and the Faculty Awards for Excellence in Graduate Teaching and Mentoring, which honor faculty for their work with graduate students.

Daniel A. Arnold,  Associate Professor of the Philosophy of Religion and a scholar of Indian Buddhist philosophy, has been recognized for his exceptional teaching with a 2021 Faculty Award for Excellence in Graduate Teaching and Mentoring.

“One of the unique qualities of the University of Chicago is the amount of intellectual space allowed here to work at developing the kind of deep understanding that can only result from lots of trial and error,” said Arnold. That’s how he approaches not only his own research, but how he works with students.

As a philosopher working with first-millennium Sanskrit texts, many of which have not previously been translated in English, Arnold knows interpretation is a meditative and painstaking process. “For close readers of philosophical texts, it’s a familiar experience to find oneself unsure exactly why a challenging passage is unclear—for example, whether there is some problem of a philological sort, or whether you’ve rightly read the text only not grasped what sense it makes for it to say what it does,” Arnold said. “Especially given the bright, motivated students we’re privileged to teach here, it’s invaluable for them to see their teachers struggling to resolve such a difficulty—to see not just what the answer is, but what it looks like to struggle to arrive at one.”

Arnold believes in giving students the space to make their own discoveries. His classroom style is intended to steer the conversation only gently, using what one student called “an almost magical ability to lead his students through a coherent argumentative arc.”

But in their nomination letters for Arnold, students also described the depth of support they received over the course of their studies: not only the careful and thorough attention paid to each piece of submitted writing, but also for the personal and intellectual development of students inside and outside academia. “He genuinely cares for the minds of those whose lives come to be entwined with his own for a time,” wrote another student.

Read more about this year's winners.