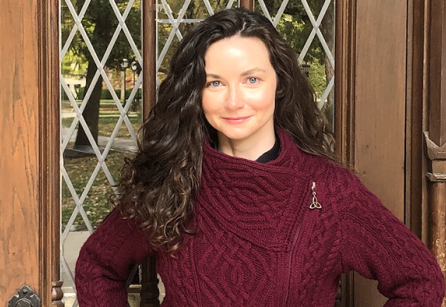 The Fellowship was established through a gift from Barbara Kirchick Urbut, AM’75, and Michael Urbut, MBA’74 in honor of the legacy and memory of the late Anthony C. Yu, Carl Darling Buck Distinguished Service Professor in the Humanities and the Divinity School, who passed away in 2015. The two-year fellowship, which supports the development of junior faculty in the Divinity School who serve as both excellent researchers and exceptional mentors, is a tribute to Professor Yu. It is designed to instill, encourage, and reward in early-career faculty the same traits that made Professor Yu a teacher and scholar of such distinction.

Professor Walsh, who joined the faculty in 2019, works on ancient and late antique Christianity, with a special focus on Syriac language and literature. She teaches and writes on a variety of topics in New Testament literature, religious poetry, the history of Biblical interpretation, and beyond. Outside of Swift Hall, she serves as the Executive Editor for Christianity at Ancient Jew Review, a non-profit web journal devoted to the interdisciplinary study of ancient Judaism.

“It is such a gift to have the opportunity to focus on my work and think about future projects, and I am so grateful to Barbara and Mike Urbut for their generosity,” said Professor Walsh about receiving the fellowship. “I am honored to continue the legacy of Anthony C. Yu right here at The University of Chicago, which has provided me an intellectual home, wonderful colleagues, and students who inspire me.”

Over his distinguished career, Professor Yu made wide-ranging contributions in work which engaged Chinese religions as well as classic texts of Christianity, Buddhism and Hinduism. His scholarship created a dialogue between Eastern and Western traditions in religion and literature that defined his comparative approach in the field. His seminal achievement, a new English translation of Journey to the West, appeared in 1983 to wide acclaim; Professor Yu continued to work on the text, and released an updated second edition in 2012.

In addition to his academic contributions, Professor Yu, with his wife, Priscilla, were well-known for their generosity and attentiveness to colleagues and students, regularly hosting gatherings and inviting students to cultural activities in the city, and maintaining warm relationships with advisees after they had left Swift Hall.