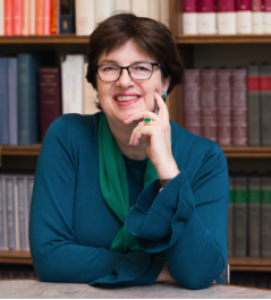 Willemien Otten studies the history of Christianity and Christian thought with a focus on the medieval and the early Christian intellectual tradition, especially in the West, and an emphasis on the continuity of Platonic themes. She analyzes (early) medieval thought and theology as an amalgam of biblical, classical, and patristic influences which, woven together, constitute their own intellectual matrix. Within this matrix the place and role of nature and humanity interest her most. She has worked on the Carolingian thinker Johannes Scottus Eriugena, on twelfth-century humanistic thinkers including Peter Abelard and, most recently, has ventured into the thought of R.W. Emerson and William James.

Her co-edited volume Religion and Memory (Fordham, 2013; with Burcht Pranger and Babette Hellemans) addresses how best to conceive the pastness of religion. Her co-edited volume Eriugena and Creation (Turnhout: Brepols, 2014; with Michael I. Allen), brings together selected papers on medieval nature. Besides her medieval work Otten maintains an active interest in Tertullian, Augustine, and the broader patristic tradition. With Editor-in Chief Karla Pollmann, she edited the three-volume Oxford Guide to the Historical Reception of Augustine (430–2000) (Oxford, 2013) and with Susan Schreiner she co-edited Augustine Our Contemporary. Examining the Self in Past and Present (Notre Dame, 2018).

Reflecting her interest in natural theology beyond the medieval period, Otten’s latest study Thinking Nature and the Nature of Thinking: From Eriugena to Emerson (Stanford, 2020) approaches ideas of nature and human selfhood across a wide array of thinkers, from Augustine to William James and from Maximus the Confessor to Schleiermacher. Deconstructing the notion of pantheism in the Western religious tradition, Otten draws attention to a more elusive idea of nature in which nature is an ally and co-worker of the divine.

Willemien Otten was a 2015–2016 ATS/Henry Luce Fellow in the History of Christianity and in Winter 2017 served as visiting distinguished Tipton professor of Catholic Studies in the Department of Religious Studies at the University of California, Santa Barbara. In November 2019 Otten received an honorary doctorate from the University of Copenhagen, Denmark, for her comprehensive work in the history of theology and church history. Since 2011 Otten has served as President of the Society for Eriugenian Studies (SPES). On April 27, 2022 she delivered the 2020 Etienne Gilson lecture “Creation and Gender in Eriugena, Hildegard, and Hadewijch,” at the Pontifical Institute of Mediaeval Studies (PIMS) in Toronto, Canada. The text of her lecture, which was postponed due to COVID-19, is forthcoming from PIMS press.

Willemien Otten is Faculty Co-Director (with Alireza Doostdar) of the Martin Marty Center for the Public Understanding of Religion and one of the editors of the Journal of Religion.