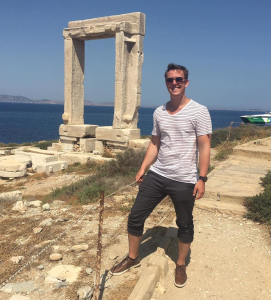 Nathan is a PhD student in the Divinity School, studying the connections between biblical interpretation and narrative analysis.  He received his Bachelor's degree from Truman State University in 2012 and his Master's degree from The University of Chicago in 2014.

My current research brings together work on biblical interpretation and narrative analysis with ancient and current theory on the liveliness of matter to explore how late ancient Christians around the Mediterranean handled the paradox of encountering divinity in material objects.  In my dissertation, I compare for the first time a body of Greek, Latin, and Coptic texts from the 4th-8th centuries that feature material images as “animate” characters—martyred saints, a shattered statue, a lively sphinx idol, and bleeding icons of Jesus and Mary.  Bringing together literary methods with New Materialist insights, I explore how Christian narrative authors played creatively on knowledge about the (in)abilities of images to mediate the presence of divinity in the world.  These authors, I argue, not only carved out spaces for Christian material cult; they also deployed material images to reflect upon the disjunctions between spiritual and corporeal life by blurring and redrawing the boundaries of what counts as living.  Through selective attribution of signs of life (like movement, speech, sight, and blood) in conflicts between Christians, pagans, Jews, and material objects, the texts I explore reimagine the religious landscape with consequences for who was considered by Christians as a full, living human being.  Rather than attribute absolute positions on religious images, my work reveals a dynamic, flexible ancient Christian discourse on images that allowed them to reject the special objects of others as “lifeless idols” but experience their own as “living images” with links to divine realities.  More broadly I am interested in Christian apocrypha and the impact of “non-canonical” texts on theology and art, and I have been dipping my toes from time to time into Monster Theory.

To be honest, I was almost dead set against coming to Swift.  I had applied to UChicago for undergrad and ultimately had not gotten in, so I had a bit of a ridiculous grudge against the place.  Fortunately, about half the Philosophy and Religion faculty at Truman State had received their PhDs at the Divinity School, and they talked me into applying.  When it came down to it, their financial aid package was the best offer I received, I came for a visit, and the rest was history.  It was immediately clear that this was going to be a supportive and thrilling intellectual environment for me.  I accepted my offer the first night of my visit.

This is always a hard question.  I used to say things like “oh, because it is a fundamentally human experience” or “because religion is such an important social and political motivator.”  I still think those things, to a large extent, but what motivates me is two-fold: religion is a field of inquiry that can intersect with just about every other discipline; and, perhaps as a result, there is really a dearth of informed, thoughtful and critical discussion of religion.  A mentor of mind used to say (and maybe still does) that the study of religion is incoherent because it has neither a common object of study nor a common method.  And that is true—but it is also exciting!  When one studies religion seriously and with an open mind, there is always something new to glean from the insights of literary studies, sociology, anthropology, biology ethics, etc., something to use to think critically about what religious practices obscure and reveal.  Likewise, there is always an opportunity to speak back to these fields in a way sensitive to the dynamism and diversity of religious expressions across time and space.  In other words, why not study religion?

What is an aspect of life at the Divinity School or in Hyde Park that you enjoy?

We are so lucky at the University of Chicago to be this close to Lake Michigan and the lakefront path.  Hyde Park is on the come up—an ever-increasing number of shops and restaurants to check out—and it remains one of the more integrated, diverse neighborhoods in the city.  It is tough to beat days at the lake in the summertime or walks and runs along the lake even in winter.  I have been enjoying it for a decade now—a great place to enjoy the stellar intellectual exchanges of the Divinity School and Hyde Park.