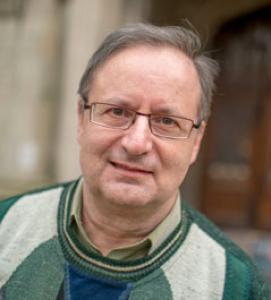 Hans-Josef Klauck has worked extensively on New Testament topics, such as the parables of Jesus, Paul’s Corinthian correspondence, and the Johannine letters. In addition, he has specialized in the religious and social history of the Greco-Roman world as a necessary background to New Testament studies. Among his most recent books are Ancient Letter Writing and the New Testament: A Guide to Context and Exegesis; The Religious Context of Early Christianity: A Guide to Graeco-Roman Religions; Magic and Paganism in Early Christianity: The World of the Acts of the Apostles; and Religion und Gesellschaft im frühen Christentum. He has been the editor of Herders Biblische Studien, Stuttgarter Biblische Studien; New Testament area editor for the new edition of Die Religion in Geschichte und Gegenwart; and main editor for the New Testament section of Encyclopedia of the Bible and Its Reception. He still is coeditor of Hermeneia and Evangelische-Katholische Kommentar zum Neuen Testament. He is currently working on an introduction to the New Testament apocryphal literature, the first volume of which, Apocryphal Gospels: An Introduction, was published in 2003, the second volume, Apocryphal Acts: An Introduction, in 2007. He also published Ancient Letters and the New Testament: a Guide to Context and Exegesis, in 2010. His books have been translated into seven languages thus far. Professor Klauck was the 2003–04 president of the Studiorum Novi Testamenti Societas.