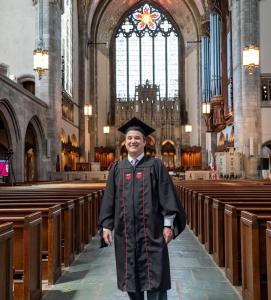 Brian received his Master of Divinity degree in 2022.

What are your academic interests?

I have many academic interests, including studying the intersection of capitalism, work and career, and Christianity; and the history of Christianity, particularly the Reformed tradition.

Tell us about your interests and inspiration in public religion leadership

I am interested in working with people curious about Christianity and those who are questioning their faith. I am also interested in counseling people who are having trouble with meaning-making in their work, and how their religion can help them find balance in their lives.

Who or what inspires you and your work?

There are too many to mention, but for me, following God's call is the biggest inspiration and the greatest source of peace for me.

What's next for you?

I am planning on becoming an ordained minister in the Presbyterian Church (U.S.A.) in the coming months and starting work in ministry most likely in a congregational setting.

Even in an increasingly secular age here in the United States, religion plays a critical role in some of the greatest debates of our time, and it plays a big role in our politics. Knowing how politicians and other leaders use religion for political ends is critically important in our time. Whether a person is religious or not, knowing about religion and its presence overtly or covertly in public debates, is as crucial as it has ever been.