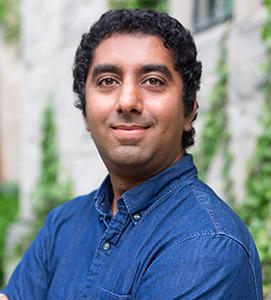 Faculty Assistant Professor of the History of Religion in South Asia; also in the College

Anand Venkatkrishnan is an intellectual historian of religion in South Asia. His book in progress, Love in the Time of Scholarship: The Bhāgavata Purāṇa in Indian Intellectual History, examines the relationship of bhakti, religion as lived affect, with philosophy as intellectual practice. It shows how Sanskrit scholars in early modern India allowed personal religious commitments to feature in and reshape their scholastic writing, a genre that was generally impervious to everyday life. It also demonstrates how vernacular ways of knowing pushed through the glass ceiling of Sanskrit intellectuality. Anand's second project, titled Left-Hand Practice, concerns a group of loosely affiliated religious intellectuals in the 20th century who had significant ties with the Indian political left. Each, in their own way, articulated a critique of modernist, bourgeois Hinduism.

Anand was most recently Preceptor in Sanskrit in the Department of South Asian Studies at Harvard University. He received his Ph.D. in South Asian Religions from Columbia University. Anand fills his spare time with sports commentary, pop culture, and translations of Sanskrit poetry at https://apurvaracana.tumblr.com/.