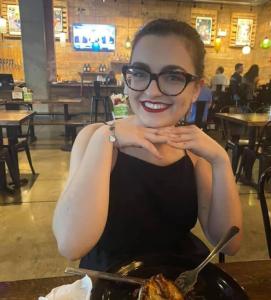 I am a current Master of Arts student in the second year of my program at the Divinity School, focusing my study on the Hebrew Bible and its reception. I also received my Bachelor’s degree from the University of Chicago (in Jewish Studies and Comparative Literature, with honors), so I have been lurking in the halls (and coffee shop) of the Divinity School for the past five years now!

What does your work revolve around, and why is it important to you?

Growing up, I was obsessed with stories; I consumed books (and later, television shows, movies, and comics, too) like wildfire, rereading and rewatching the same novels and media over and over to weave webs between chapters and episodes and to parse them apart further. Also relevant to my academic focus is that I grew up in a fundamentalist religious environment, and I have come to realize the impact that those stories have had on me. Stories—I believe—are so fundamentally human. We tell stories in every medium and for every reason: to entertain, to create community, to persuade, to upset, to pass on history and legacy, for political and social gain. Stories stick with us to the point where we can still sing songs about spiders climbing drain pipes from our youth; where some stories are retold or elaborated on by listeners and readers centuries after they were first fashioned; and where we still feel sympathy or pain for characters years after accepting their fictionality, their non-reality as historical figures. The importance of stories in individuals’ and communities’ lives and stories' ability to convey ideologies and convince us of certain realities, is essential for us to understand. Today, countless modern pop songs—theoretically “secular” though they are—still employ Garden of Eden imagery. So-called Titus 2 women’s circles control some Christian women’s lives today. Esther is a compelling role model for some young Jewish women but a disdainful figure for others, practicing or not though they may be. In order to make educated and careful decisions about ourselves and our communities, we need to know what stories are used, how the stories work to persuade and evoke emotion, and what they are being used to convince us to think or feel. Personally, I cannot simply brush aside these stories. I believe that we should turn around and wrestle with these texts and their impact, asking them questions and searching for our own answers.

Who or what has inspired you and your work?

There are many wonderful, important scholars studying and publishing on Bible and religion, but I am especially inspired by the brilliant women writing about gender in the ancient Near East, women’s history, and feminist theologies; in many ways, they have helped carve out the path in academia on which I now get to walk and engage in discussion with them. Scholars like Tikva Frymer-Kensky, Carol Newsom, Esther Fuchs, Alice Bach, and countless others not only have engendered respect for women as academics in the historically male field of biblical interpretation and criticism, but they have helped force the field at large to consider as legitimate and necessary to biblical scholars’ work the study of feminist issues, whatever that has meant for each scholar’s own project and questions.

I first fell in love with the Divinity School with all the awkwardness one might expect from a young UChicago undergraduate; I walked to the second floor of Swift and sat, small hardcover Biblia Hebraica Stuttgartensia in hand, in a Hebrew Bible workshop meeting I had discovered existed via email only that week, on a certain prophetic literature motif. I understood, generously, roughly 25% of the discussion being whipped back and forth across the table between the Div School’s graduate students and faculty. I already strove every day to keep a grip on the agency which I had only just discovered that studying the Hebrew Bible provided me. Here I fell irrevocably in love with the Div School’s passionate academic debate and dedication to critical thinking. Here, I thought, I could genuinely struggle (both academically and religiously) with religion and with biblical texts. It was unironically at that perfectly routine paper discussion that I committed myself to however many years of personally difficult language learning that it would take to prepare me to be a real contributor to this academic conversation. When one of the Bible professors approached me after that meeting to encourage me to pursue my interest and to familiarize me with the School, I knew I had gained gained the first support and advice I would need to begin and continue my pursuit of graduate work.

What is an aspect of life at the Divinity School/in Hyde Park that you enjoy?

The University of Chicago’s campus has been my home for the past (almost) six years now, and I love all of its twisting arboreal paths and vine-strewn stone buildings--but perhaps my favorite part of campus is Grounds of Being (the Div School cafe), which has all my favorite things: students I only sometimes know talking loudly about interesting aspects of history and religion, comfortingly squished-together work space mirroring the equally clustered wall decor, and an endless supply of warm caffeinated beverages. I can read compelling works or argue about class discussions with the friends I run into while they wait for a somehow Catholic-themed espresso drink, all in a space carved out below the classrooms I have lived in so long that I have them all memorized—and, again, $1 drip coffee refills. (I am but a simple graduate student.)