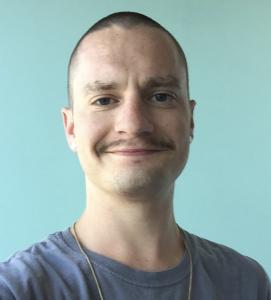 Adam is a PhD student in the History of Religions.  He studies the history and literature of Mahāyāna Buddhism in India.

My work focuses on the history and literature of Mahāyāna Buddhism in India, particularly (at least for the dissertation) on a Mahāyāna sūtra called the Precious Banner (Sanskrit: Ratnaketuparivarta; Tibetan: ’dus pa chen po rin po che tog gi gzungs), which I interrogate from a critical-historical perspective grounded in the history of religions and informed by affect theory, sociology/history of emotions, and narratology. In more general terms, my work engages religious narratives, particularly those with metatextual characteristics, as agential in the process of social formation through the dissemination and realization of what I call affective regimes—or sets of (what Arlie Russell Hochschild calls) feeling rules that seek to shape (what, following Sara Ahmed, I call) the affective orientations of readers.

Why study religion? / Why is what you study important?

For me, to study religion is to engage in two distinct yet related activities. First, it is to pay relentless attention to what elements of human culture count as “religion” for both oneself and for others, what are the reasons underlying the identification, and what are the implications that follow therefrom. (The same goes for other “bread-and-butter” categories.) Second, it is to both understand and critically interrogate the features of culture so identified in order to apprehend them as both products and productive of human social worlds. To study religion, in short, is to examine oneself and one’s object(s) of study in equal measure. Doing so promises to yield not only understanding humans as complicated animals with varied histories but also the capacity to envision and realize better versions of ourselves.

My path to the Divinity School, and to the history of religions specifically, was somehow both direct and winding (depending on how I tell the story). From fourth grade on, I attended small parochial schools in my hometown of Decatur, Illinois (a mid-sized city right in the middle of the state). By the time I entered high school, I had a growing interest both in religious traditions other than the one I was taught in school as well as in what I would later recognize as the relationship between religion, myth, authority, and the social world. That I wanted to study (or even could study) religion at the university level did not dawn on me, however, until after graduating with an AA from my local community college. After taking a year off, during which time I worked in home remodeling and construction, I went on to study religion at Western Illinois University (BA, 2011) and the University of Missouri (MA, 2013). While I entered WIU knowing that I wanted to study South Asian religions, it was not until my time at MU that I decided to focus on Indian Mahāyāna Buddhism and that I found my theoretical and methodological footing in the study of religion. After graduating from MU, I took a year off to stay home with my first of two kids, during which time I shopped around for programs and submitted applications. Among the programs to which I applied, the History of Religions PhD track at the Divinity School was clearly the best fit for me in terms of faculty specialization and temperament.

My favorite course at the Divinity School is a recurring seminar called Problems in the History of Religions. It is held at the leading faculty’s house (or Zoom room, as the case may be) one night per week during the winter quarter. Each week, one student pre-circulates a piece of written work—anything from a conference paper to a dissertation chapter. And when we convene, a pre-assigned student serves as a formal respondent. After the response, which attempts to offer a charitable summary and raises a few initial critical questions, we discuss the paper together for a couple hours, raising further questions and offering constructive criticism. In many ways, then, the Problems Seminar is basically a workshop. It affords us an opportunity to hone our abilities to engage with questions of interest beyond our narrow subfields (since this is one thing the History of Religions aspires to do). And it also gives us a chance to practice being generous and professional interlocutors. But perhaps most importantly, at least for me, it is the place where I forged close personal and professional relationships with colleagues.