What to the Immigrant is Veterans Day?

Specialist Rudolph R. Hizon was a 22-year-old infantryman in the United States Army when he was killed by an improvised explosive device in Logar Province, Afghanistan, in 2011. I was in Logar when Rudy died, serving as a human terrain analyst for the 4th Brigade Combat Team, 10th Mountain Division, the same unit where Rudy served as an infantryman. I didn’t know Rudy personally, but I can’t help but feel close to him. Beyond being be deployed together in 2011, both of us are Filipino immigrants to the U.S., both sons named for our fathers, and both from family lines whose ancestors had the name Hizon foisted upon them by the Spanish. Both of us were sustained and connected to our Filipino heritage in the Afghan mountains by a network of Filipino soldiers and civilians who would find each other on the various forward operating bases and combat outposts in our area of operation. Though I never met Rudy specifically, when I could I would gather with my fellow Filipinos to share conversation in our Tagalog language and, more importantly, by some magic and perhaps a bit of light smuggling of contraband items, take part in the gathering over traditional food and drink that is so central to our culture. I am so grateful that the cold realities of war were warmed by these moments and the company of my fellow Filipinos. They made home feel a bit closer amidst the far reaches of a hostile foreign land.

While these happy times sometimes color my memories of war, my Veterans Day reflections on Rudy’s death are always somber. This year they were also marked by an undeniable bitterness—bitterness because it is hard to be an immigrant in America right now. Rudy died an American hero, but he did not, by law, die as an American.

This had real ramifications for Rudy and his family. The vagaries of U.S. immigration law made it difficult for Rudy’s mother, who lived in the Philippines, to see her son. She didn’t see him in the three years before his death. Had Rudy been a U.S. citizen, he would have been able through various programs to facilitate her travel and stay in the country. When Rudy’s mother finally did arrive in the U.S., it was to meet her son’s flag-draped casket.

Rudy would, thankfully, be posthumously granted citizenship. Reporting on Rudy’s death, the Los Angeles Times took note of a special naturalization ceremony for U.S. military members in Afghanistan. At this ceremony, Ambassador Karl Eikenberry eulogized Rudy saying that “[Rudy] cherished the United States and upheld her values until the end.” This Veterans Day, as I honored all those who served, and Rudy in particular, I could not help but weep on account of the wave of anti-immigrant sentiment that has seemingly swept the United States in recent years, sentiment directed at people who, like Rudy, often cherish America and uphold her values. I also cannot help but wonder, as I did for the twenty years I spent as a foreigner in the only country I have ever truly known, what is it that makes one American?

As he spoke more about Rudy at the naturalization ceremony, Eikenberry hinted at an answer to this question. He said that “although [Rudy] was not able to swear the oath of citizenship, we know from his actions that, in his heart, he was a true American.”

But what did Eikenberry mean by this? Was Eikenberry saying that dying for the United States is the sure sign and seal of being American? This doesn’t make sense. Only 7 percent of U.S. citizens even serve in the military, only a fraction of whom ever see combat, let alone are killed in action. Does one perhaps simply have to be willing to die? I’ve seen many Americans who never served and never will serve declare on a daily basis their willingness to defend this country. Ostensibly though, Rudy showed himself willing when he enlisted and swore to “support and defend the Constitution of the United States against all enemies, foreign and domestic” and to “bear true faith and allegiance to the same.” Yet even upon swearing that oath of enlistment and becoming a U.S. soldier, Rudy Hizon was not recognized as an American.

Indeed, despite the fact that in Rudy’s case he was granted posthumous citizenship, fighting for and even dying for the United States of America does not seem to make one fully American. In August of this year the U.S. Citizenship and Immigration Service (USCIS) announced its intention to terminate a program that gave special consideration to the families of Filipino World War II veterans who served as part of the U.S. military (the Philippines was then still an American territory). USCIS terminated the program to align with the Trump Administration’s Executive Order 13767, “Border Security and Immigration Enforcement Improvements.” If those who answered America’s call in the historic hour of its most pressing need can be dismissed so easily, if their service and sacrifice do not make them “true Americans,” then what does?

Even now, as a U.S. citizen, indeed one who has served in a position of governmental trust, I am still unsure what makes me an American. Indeed, sometimes I am still made to feel an impostor. I vividly remember having the American flag, a flag I once wore proudly on my shoulder under fire, unfurled menacingly in my face as if to say, “you do not belong.” Political science and law seem to be inadequate to the task of capturing what it fully means to belong. While these disciplines—which we tend to rely on to adjudicate these kinds of matters—fail to speak to my questions, I have found insight in an unlikely place: religious ritual, specifically the Christian ritual of baptism.

The Sunday before this Veterans Day, my family attended a baptism for the newest and smallest member of our church. A cup of water was carried to the font by each person in our congregation, a congregation that is young, old, black, white, Asian, Latinx, queer, straight, native-born, and immigrant. One by one we poured our cups into the pool that would be used for the sacrament. As the waters mingled together, our pastor asked the traditional questions of the baby’s parents, “do you renounce sin,” etc. But baptism does not end when the one being baptized or, in this case, the parents that represent her, answer and confess their fidelity. Before our pastor dipped her hand in the water and gently wiped the cross upon the baby’s forehead, she turned to us, the church, to ask for our commitment to love, care, raise, and most importantly recognize this baby as one of us and a child of God. She said to us, “In the Christian tradition it is the work of the whole community to let [the baptized] know just how much God loves her and invites her to be in real relationship.” Only then did she complete the sacrament. The baby is a child of God regardless of whether or not we answered in the affirmative, but there is something about recognition, commitment, welcome, and love that the community declares that sealed her membership and offered her a place to belong. Perhaps the same is required for immigrants.

Rudy’s story shows that becoming American, becoming part of any nation, is not merely a matter of legal status. Nor is it simply a matter of feeling, or even some deep internal conversion to an American way of life or American values. Immigrants like Rudy and myself may be American in our hearts. We may say and do all the things that are outward signs of fidelity to the nation. But at some point the community must answer, must recognize us as Americans in order to seal this civic sacrament. As I said my prayer this Veterans Day for Rudy and his family, a verse from the Hebrew Bible sprung to mind—Leviticus 19:4: “The alien who resides with you shall be to you as the citizen among you; you shall love the alien as yourself.” It is the golden rule, but on a national and international level. Immigrants love America. They flock to her shores, whatever her problems, because of the ideals she represents in the world. Rudy loved America. I love America. It is my prayer that, someday, America will love us back.” 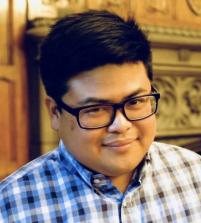 Author, John Sianghio (MDiv’15), is a PhD student in religious ethics at the Divinity School. Formerly, he was Assistant Professor and Chair of the Department of Political Science at Trinity Christian College. As a political scientist, he served as an embedded asset advising U.S. Army units in Afghanistan during Operation Enduring Freedom. He lives on the Southside of Chicago with his wife and son.

See All Articles by John Sianghio