"We Don't Have Enough Proof": Pizzagate as Epistemological Panic

A man with a rifle enters a pizza place, not for the purposes of mass murder or terrorism but on a quest for epistemological certainty 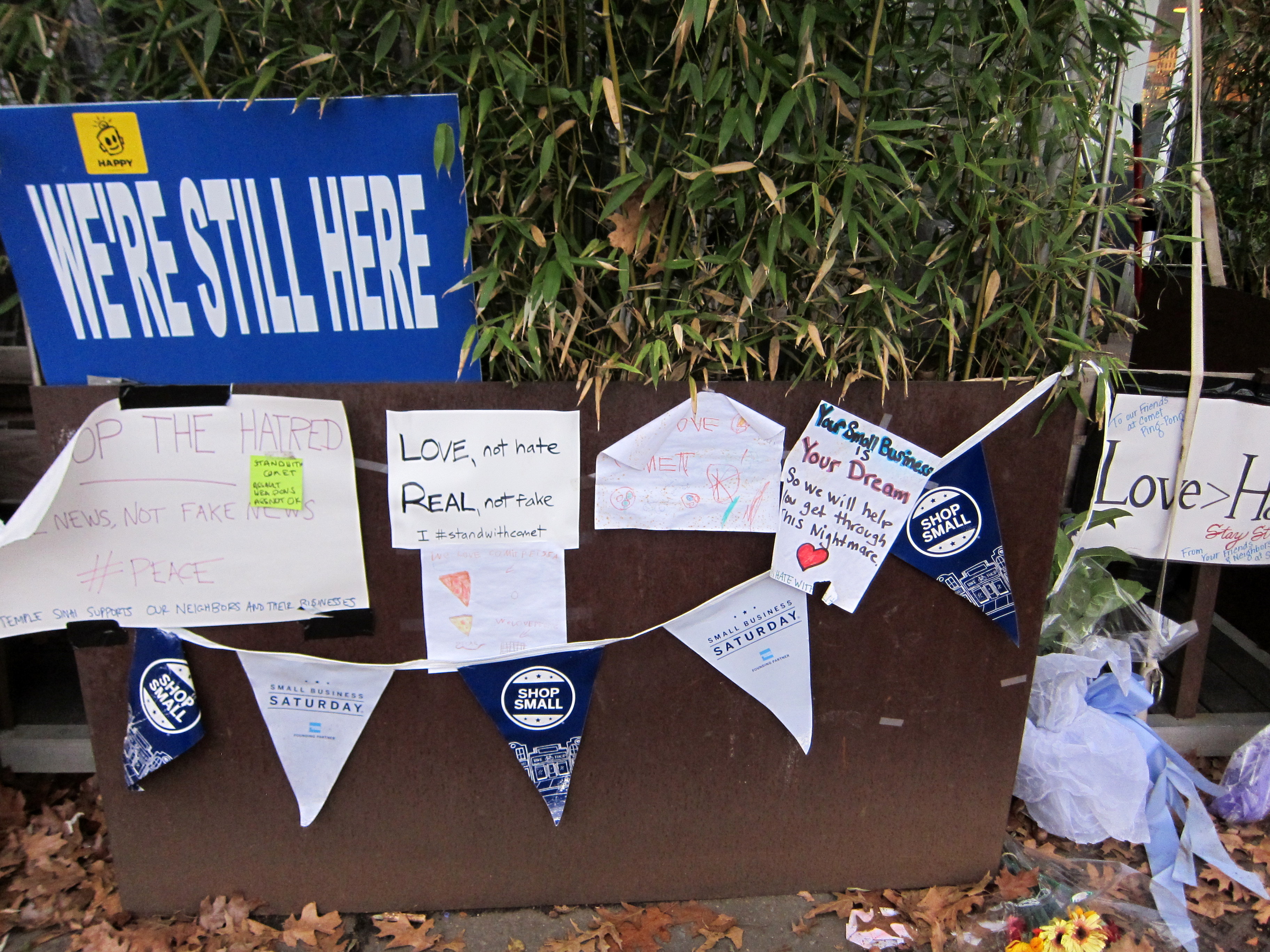 A man with a rifle enters a pizza place, not for the purposes of mass murder or terrorism but on a quest for epistemological certainty. Twenty-eight-year-old Edgar Maddison Welch had heard a theory, and he wanted to know if it was true. He had encountered certain pieces of evidence—circumstantial, to be sure, but, in accumulation, unsettling—and he had heard others, likewise troubled, call for a thorough investigation.

The Comet Ping Pong gunman is a manifestation of a contemporary American epistemological crisis. Including but going far beyond discussions of “fake news,” this crisis emerges from anxiety about the news—about how news stories are selected, reported, and vetted; about who controls the process, who can play a part, and how money and power are connected to journalism. This crisis plays on core American tensions over populist access to knowledge versus elite expertise in knowledge practices. This crisis incorporates elements of anxiety about class and the esoteric (because also necessarily elite, initiatory) subcultures of the wealthy. This crisis plays to religious desires for both certainty and agential roles in clear-cut eschatological drama. At present, this epistemological crisis consumes social media, undermines traditional journalistic institutions, and simultaneously threatens and implicates an academy (particularly a religious studies industry) complicit in speaking of “knowledges” as contingent cultural productions rather than true or false realities.

Welch was acting in response to a set of suppositions and hypotheses called, collectively, “Pizzagate,” linking Comet Ping Pong—via its affiliations to Hillary Clinton’s presidential campaign and mention in John Podesta’s “Wikileaked” emails—to child slavery and trafficking and the Satanic sexual ritual abuse of children. Popular as a discussion topic on online forums and treated in conspiracy-themed media sources like Alex Jones’s Infowars, Pizzagate narratives often involve the presence of secret tunnels under DC’s popular Comet Ping Pong restaurant, the connection of Clinton and Podesta to occult practices via contemporary artists and celebrities, and an insistence on ubiquity of symbols and coded communication (such that “pizza,” for instance, never merely means “pizza,” but is always a stand-in for something far more sinister, like child rape).

The New York Times described Pizzagate as a conspiracy theory “with no evidence,” but to those enthralled by the theory, there is no lack of potential evidence. Indeed, that is the problem. The Comet Ping Pong logo, for instance, contains crescent moons, symbols sometimes associated with Satan! As “pizza” could be code for child rape, then what to make of the pizza-shaped charm on the homemade friendship bracelets of President Obama and Vice President Biden? Such evidence, however, is only potential—“circumstantial evidence”—possibly just coincidence, possibly something more. The central anxiety—the source of panic, and, in the case of the gunman, the prompt for action—is How can we know?

Such evidence is “pure speculation, but it does seem very odd,” demanding actual investigation, empirical testing, an act of proving or disproving. As one contributor to the Pizzagate theory writes, after presenting assorted pieces of possible evidence: “Of course, none of this proves that Pizzagate is real…. Pizzagate throws up many questions but at the moment, there are no real answers.” (See Ewart under “Resources” below.) This lack of answers tortures those who take seriously the possible evidence in this case. Believing that such evidence is conclusive is not enough. As one theorist says, “I believe that Pizzagate is real,” but such private belief is meaningless unless it prompts real action in the world. Her goal, and the goal of the Pizzagate theory community she represents, is to “point some very disturbing things out,” to get the attention of the media and the public “so that there is pressure for this to be properly investigated.” The desire is to go beyond belief: to know, to be certain, and to convince the world of the objective and factual reality of the theory. It is out of this desire that Welch acted.

Pizzagate is merely one manifestation of our current epistemological panic, facilitated by the replacement of (elite) broadcasting venues with populist access to media, stoked by anxiety over the overlap of the megawealthy with those in positions of political power, exacerbated by those things that are not merely engaged in but valued and given value by the megawealthy (contemporary art, in particular: Jeff Koons, Lady Gaga, and Marina Abramović all represent foci for terror; their decadence and/or esotericism coupled with a magical commodification of otherwise commonplace objects, from balloon animals to sliced meat to sitting and staring for a long time).

The epistemological panic is, in turn, a moral panic, and, in keeping with moral panics in American history—Salem, for instance, or the ritual child abuse panic of the 1980s—it offers believers important roles in decoding the plot of and fighting against cosmic evil. Yet the current epistemological panic resists the certainty of previous moral panics: the anxiety over Satanic conspiracy is ultimately not as horrifying as the anxiety over not knowing and not knowing how to know or how to let others know.

Some of the very mechanisms of media that have perpetuated such conspiracy theories have also perpetuated anxiety about them. Consider Alex Jones, whose Infowars has reported on Pizzagate repeatedly. He has also claimed that the story is “absurd” and a cover for the real crimes detailed in the Podesta emails. Mainstream (“fake”) media, he claims, is “hyping” the Pizzagate story in order to divert attention from these other, unnamed crimes. Like his standard move of decrying a given event—the Sandy Hook school massacre, the gunman in DC—as a “false flag” hoax to distract the public from the truth, this shuffling of Pizzagate from “real” to “fake” fuels a sense of epistemological uncertainty, adding to the anxiety of those who want not to believe but to know.

Scholars of religious studies generally insist upon a multiplicity of knowledges, bracketing our own truths in order to examine the truths of others. Suspension of judgment on knowledge, however, can only hold so long. Either children are being kept in captivity and routinely raped under Comet Ping Pong pizzeria or they are not; disinterest in such either/or realities by academics isn’t an empathetic stance, it’s irresponsible. But importantly, when it comes to the current epistemological crisis, our subjects aren’t content with fluidly shifting “knowledges,” either. The voices of Pizzagate are voices gripped by doubt. Not content to believe, they want, desperately, to know.

As part of the elite infrastructure traditionally associated with knowledge—its dissemination, its validation—academics must own up to their own responsibility for, and take action to end, the current crisis, an epistemological panic that may well destroy our democracy’s essential journalistic institutions and standards and imperils our own existence as “experts” and scholars.

- Ewart, Alan. “What is Pizzagate Telling Us About Wikileaks, The CIA, the Illuminati, and the New World Order?” The Inquisitr News. Accessed December 14, 2016.

- Jones, Alex. “Pizzagate Is A Diversion From the Greater Crimes In Podesta Wikileaks.” Infowars.com. December 5, 2016.

See All Articles by Spencer Dew