Hulu's new documentary about the Falwell family sheds light on entanglements of religion and politics and has important implications for the current moment.

In the summer of 2020, the evangelical world was rocked by scandal when two of its central arbiters of moral righteousness were accused of having engaged in a sexual relationship with another man. Evangelical power player Jerry Falwell Jr. and his wife, Becki, had reportedly engaged in an affair with Giancarlo Granda, a young pool attendant, whom they met on vacation at the Fontainebleau Hotel in Miami. Although he denied any involvement in the affair, Falwell, the son and scion of televangelist and Moral Majority founder Jerry Falwell Sr., was forced to resign from his position as chancellor of Liberty University.

Last week the streaming platform Hulu released “God Forbid: The Sex Scandal that Brought Down a Dynasty,” a new documentary that purports to tell the “true” story behind the relationship that brought about the Falwells’ fall from grace. What unfolds is a tale of hypocrisy, emotional manipulation, and a classically American marriage of religion and politics, made more credible (and more interesting) by the context and critique offered by the scholars featured in the film.

“God Forbid” opens with a shot of Granda, dressed in a black polo shirt and jeans, framed by a wall of windows through which one can glimpse the shimmering blue of a pool. He looks straight into the camera when he speaks. “If I would have known that accepting this woman’s invitation to go back to her hotel room would have led to a scandal involving the president of the largest Christian university in the world and the President of the United States, I would’ve just walked away and enjoyed my quiet life.”

Instead of walking away, Granda tells viewers, he spent the night with the Falwells. That night turned into to a seven-year relationship in which he became increasingly enmeshed in the couple’s private and public lives, spending weekends with their family, traveling with them on Liberty University’s private jet, and even becoming co-owner of a real estate venture with them. The Falwells introduced Granda to many of their business and political associates, including attorney to the elite Michael Cohen and then-aspiring presidential candidate Donald Trump. All the while, the Falwells presided over a university that fines students for violating a morality code that prohibits drinking alcohol or engaging in sexual activity.

According to Granda, sexually explicit photos of Granda with Becki Falwell ended up in the hands of Cohen, who used them to blackmail Jerry Falwell Jr. into endorsing Trump in 2016. When the relationship was eventually made public in 2020, Granda was ridiculed. He was dubbed “the pool boy” by journalists and meme-makers alike; the public criticism caused him to contemplate taking his own life. At the same time, the Falwells’ carefully-constructed image of moral wholesomeness continued to fracture. Jerry Falwell appeared intoxicated at public events and posted sexually suggestive photos of himself online. By summer 2020, these incidents proved too damaging for Falwell to overcome, and he stepped down under a cloud of scandal.

“God Forbid” is an uneven amalgam of historical narrative, political commentary, and sensational entertainment. Still, there is a consistent critique of the ménage à trois of sex, politics, and religion throughout the film. Scenes of students praying at Liberty are spliced alongside women in bikinis, college students partying at the Fontainebleau, and dramatizations of Becki Falwell’s desperately flirtatious text messages to Granda. In the early parts of the film, music by The Game and Moby offers invocations of God while a muscular man in a bathing suit, arms spread wide to resemble the image of Christ on the cross, swims across a pool to wrap himself around a woman who wears a cross necklace dangling between her breasts.

A large part of the power (and, admittedly, the pleasure) of the documentary comes from its amplification of the irony of the Falwells’ situation. For two of the top cops of evangelical purity culture to have been caught violating the laws they so stringently enforced at Liberty is too delicious to ignore. Still, as a scholar of religion, I do not find the harnessing of religion to politics or sex to be novel, nor would I make a normative argument, as “God Forbid” seems to have done, that religion should be in some way free of either (or indeed that it ever could be). Instead, what I find useful about “God Forbid” is how it takes Granda’s affair with the Falwells as an opportunity to offer a massive audience a historical explanation for issues of widespread concern: how evangelicals became such a powerful force in American electoral politics, and why they so often support candidates who ostensibly violate the values they espouse.

Through the commentary provided by scholars Randall Balmer, Anthea Butler, and Matthew Sutton, “God Forbid” argues that there is a long tradition in the United States of Christians aligning themselves with powerful public figures, regardless of their ostensible moral character. The Falwells are prominent figures in that tradition. Jerry Falwell Sr. was a central player in a highly influential movement in American politics in the 1960s and 1970s, through which right-leaning Protestants become integrated in, rather than estranged from, political activity. Through his televangelism and his leadership of Liberty University and especially the Moral Majority, Falwell helped to shepherd millions of white evangelicals into the political arena while engineering the flight of many others away from the Democratic party.

Falwell argued that it was a sign of one’s Christian values to participate in politics, to enter the voting booth and the public square. He and his co-conspirators encouraged their flock to vote for candidates, like Ronald Reagan, who opposed legislation and policies that supported the rights of women, people of color, LGBTQ+ people, and the working class, among others. “Evangelicals, all they wanted to do was win, and they were willing to win with anyone that they possibly could,” Anthea Butler argues. The fact that Reagan represented few of Falwell’s “family values” meant little in the face of his potential to usher in a new era of conservative policy. As Balmer notes, “They didn’t care that Ronald Reagan wasn’t evangelical. Here you have Jimmy Carter, a born again, Southern Baptist, progressive evangelical. And evangelicals, they turned dramatically against him and then settled, improbably, on a divorced and remarried, former Hollywood actor…” It was Reagan’s politics, and not his morals, that appealed to the Moral Majority.

In “God Forbid’s” narrative, Jerry Falwell Jr. was instrumental in furthering this imbrication of religion and politics. This is not because he inherited his father’s religious fervor or his talent in the pulpit, but because he inherited name, wealth, and position—and thus his authority among other evangelicals and his utility for conservative politicians. Under Falwell’s leadership, Liberty University acted as a stage on which candidates for office like Ted Cruz and Mike Pence performed their fidelity to a certain kind of Protestant ideal and where they received Falwell’s blessing—and by extension, the support and approval of American evangelical voters. This was particularly the case with Donald Trump. His success with evangelicals (and thus much of his success in the 2016 election) is largely attributable to Falwell’s endorsement, just as Reagan’s in 1980 was attributable to Falwell’s father. And like Reagan, the fact that he violated nearly all aspects of a “family values” agenda meant little when election day dawned. This partnership between the religious right and conversative politicians continues, as evidenced by the strength of Herschel Walker’s campaign against incumbent Raphael Warnock in Georgia in this week’s midterm elections.

It is nothing new for prominent individuals to be embroiled in sex scandals, and the exploitation of such stories for our viewing pleasure is a tried-and-true tradition of American pop culture. What makes “God Forbid” interesting beyond its salaciousness is the way it uses the “pool boy” scandal to tell the story of the birth of the religious right and its powerful participation in electoral politics. That story might be familiar to those of us who study American religion or who are attentive to the strange bedfellows that religion and politics often make. Nonetheless, it is a story still unknown to many, and it has enormous implications for the present—and the future. 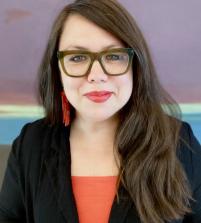 Emily D. Crews is the Assistant Director of the Martin Marty Center for the Public Understanding of Religion. She is a historian of religions who studies the relationship between Christianity and issues of gender, the female reproductive body, and practices around fertility, pregnancy, and mothering in Africa and the United States. She is the co-editor (with Russell T. McCutcheon) of Remembering Jonathan Z. Smith: A Career and its Consequence (2020).