In Memory of Steven Collins

Steven Collins (1951-2018) was Chester D. Tripp Professor in the Humanities in the University of Chicago’s Department of South Asian Languages and Civilizations, and in the Divinity School’s History of Religions program. A world-renowned scholar of the Pali Buddhist traditions of south and southeast Asia, he contributed greatly to the University of Chicago’s unusual strength in Buddhist studies. Prof. Collins tragically passed away on February 15, while in New Zealand leading a seminar. 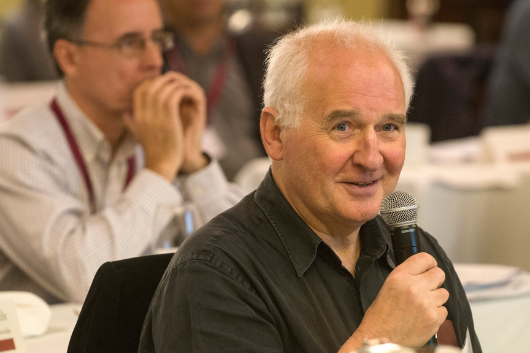 Only near the end of an abortive first venture in graduate school at Columbia University did I first discover that it was not history but philosophy that really interests me. My fortuitous discovery was owing to the fact that around the time that Daniel Dennett’s Consciousness Explained was published and widely reviewed, there also came across my radar screen a book that has long been recognized as the standard treatment of the Buddhist tradition’s cardinal doctrine: Steven Collins’s Selfless Persons. The latter is focused (as its subtitle says) on “Imagery and Thought in Theravāda Buddhism,” while Dennett’s work in philosophy of mind is largely informed by state-of-the-art cognitive-scientific research. Despite, however, their different orientations, it was in reading these books together that I first learned that what I really wanted to pursue was philosophical reflection on what it means to be a person, despite the fact that there is nothing at all—no ultimately real self—that anyone “really” is.

Over the many years that followed my transformative encounter with Steve Collins’s seminal classic (which I’ve recommended to pretty much everyone who has since then asked me what to read on Buddhism), I would eventually become good friends with the scholar of Pali Buddhist thought who wrote it—a world-class, Oxford-educated scholar of working-class English background. As his friend, I often told Steve that it was in reading Selfless Persons that I had first realized where my interests really lay. My arrival at the point where I could delight in sharing this with him involved, however, a circuitous route.

I first met Steve Collins when, years after having bailed on Columbia, I was scouting the University of Chicago as a prospective doctoral student. I had in the intervening years gained something of a philosophical education, and I was eager to learn from the man himself how Prof. Collins might figure in my studies in Buddhist philosophy. To my surprise, however, Steve emphatically disavowed any philosophical expertise. (He would do so many times in conversation over the years, though it has always been clear to me that he was very much a philosophical thinker.) Though his Selfless Persons had, he allowed, some philosophical dimensions, Steve had decided, he told me, that studying Indian Buddhist philosophy was just too hard—it required, he said, knowing Mīmāṃsā (a Hindu school of thought) backwards and forwards; it required knowing Nyāya (another Hindu school) backwards and forwards; it required knowing Vedānta backwards and forwards. He continued thus naming Indian traditions of thought integral to the historical context of Buddhist philosophy, and I experienced each repeated adverb as a lash that flayed my then-emerging philosophical aspirations.

I felt much reduced by the experience. Nevertheless, I was preoccupied throughout the interview by the fact that the eminent Indologist who thus counseled me was wearing a super spiffy Miles Davis T-shirt, and it delighted me that he positively lit up when I noted it at the conclusion of our conversation. I would in time come to learn that the different ways I thus experienced Steve Collins in our first meeting—at once uncompromisingly rigorous in pursuit of intellectually serious questions that he approached with humility, and humanely capable of bonding over a shared love of music—together epitomized the complexly admirable scholar and person whose life was tragically cut short two weeks ago.

Reflecting now on my friendship with this remarkable scholar, I am struck by how pedagogically decisive his presence was for me, despite the fact that (I’m sorry to say) I never took a class with him. Though I am rather at a loss to explain this oversight in retrospect, perhaps I never got around to it because I all along experienced myself as learning so much from him anyway. This was, of course, partly on account of his brilliant scholarship, which continued to be as impressive and important as his Selfless Persons. A particularly rewarding part of my preparations for qualifying exams was the long time I spent reading his remarkable Nirvana and Other Buddhist Felicities, which is rare for its warranting every one of its nearly 700 pages. (A little over a decade later, Steve published a shortened version of this for the faint of heart, but I cherish the fact of having eagerly read the definitive version in its entirety.)

His pedagogically decisive presence was most strikingly evident to me, though, in how much I learned from his invariably engaged presence at lectures, workshops, and seminars. Steve’s consistent attendance at scholarly discussions of all kinds is testament to his good citizenship as a faculty member. Few who have experienced his presence in these contexts will have failed to notice, though, that Steve almost always asked the most incisive questions. I first learned as a graduate student, and then came more greatly to appreciate as his colleague, that regardless of what had been presented—something on Foucault, perhaps, or modern Bengal, or gender identity in Thailand—Steve would put a question that cut right to the heart of the matter, bringing sharply into relief for everyone the intellectual stakes of whatever was at issue. Coupled with the fact that he would typically look rather pained in expressing his query (Steve was fond of saying in this regard that he simply found it painful to think), the incisiveness of his questions surely made many a learned scholar uncomfortable; but while they might thus occasion some squirming, his questions were unfailingly fair, pertinent, interesting, and strikingly smart. I was very glad that I had already learned as a student what to expect when I saw Steve’s raised hand after my job-talk at the University of Chicago—glad already to know that even if Steve looked veritably sickened as though by the lameness of my talk, his question would be edifying for everyone present, and that it would be one that I not only ought to be able to answer in the moment, but also one that I would likely find myself thinking about for months to come. (In the event, I don’t think I answered Steve’s question very effectively on that occasion.)

Much though I’ve learned, then, from Steve Collins’s exemplary scholarship on the richly fascinating thought-world of the Pali Buddhist tradition, I feel certain that I learned even more from the many occasions on which I thus had the chance just to watch him think through whatever came his way, the real interest and import of which often became clear to me only in light of his characteristically penetrating questions. And while I regret my failure ever to have taken a class with him, Steve Collins was, nevertheless, very much a teacher to me, in which capacity he continued until the utterly unexpected end of his life. I will miss many things after his tragically untimely passing. I’ll miss running into him on campus, this eminent officer of the Pali Text Society looking badass in sunglasses and leather jacket as though just coming from a jazz club. I’ll miss listening to music and playing Scrabble with him. (Among the tragic dimensions of his sudden passing is that he had really upped his game in recent months, finally having learned that not erudition but points matter in Scrabble.) I’ll miss, surely, his continued presence in the world of Buddhist studies. I expect, though, that I may miss him most when, at talks in Foster Hall, there fails to emerge the kind of singular moment of clarity that I’ve so long associated particularly with Steve Collins. May all of us who learned from his exemplary intellectual engagement strive to continue bringing something of this lost clarity of thought to a world badly in need of it.

Photo: Steven Collins at the University of Chicago’s Wisdom Research Forum on May 8, 2015 (YouTube)

See All Articles by Dan Arnold