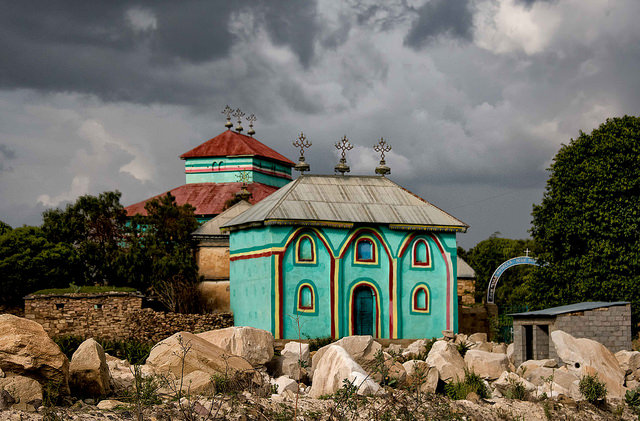 If scholars answer these questions in the affirmative, then the standard narrative of the Reformation as a solely European event will need to be revised. Narratives more open to global exchanges will need to be crafted. Historians can glean insights into such an alternative narrative from a small cadre of researchers. The renowned German scholar Martin Brecht, George Posfay, Tom G. A. Hardt, Mark Ellingsen, and Martin Wittenberg have all acknowledged the presence of Ethiopian Christianity in Luther’s thought, even if in a limited manner.

European interest in Ethiopian Christianity already existed in Luther’s era. Before and after 1517, Erasmus, Thomas More, Pope Clement VII, and others mentioned the Church in Ethiopia. Ethiopian expatriate communities existed in Rome, Venice, Cyprus, and Jerusalem. Luther himself mentions Ethiopia at least 85 times. Among these are references to ancient places and issues, while at least 15 refer to the then-contemporary empire of Christian Ethiopia. From these scattered comments, an historical arc and outline of Luther’s understanding of Ethiopian Christianity can be reconstructed.

A few selected quotes offer a sample of Luther’s perspective on Ethiopian Christians:

“… most of the time when mention is made of the nations that are to be converted to Christ, the Ethiopians are singled out for mention.” (LW 10:349)

While these statements all have theological implications, it is Luther’s narrative of Ethiopia and his purposes in invoking Ethiopia that should most attract the attention of researchers. For Luther to say that the Christian Church “is symbolized and called by the name ‘Ethiopia’” apparently reflects his belief that the first gentile to convert to Christianity was the Ethiopian profiled in Acts 8 whom tradition, advanced by Eusebius and others, credited with converting the Ethiopian kingdom to Christ, making Ethiopia the first Christian kingdom in history. Though Luther can be excused, of course, for not knowing modern historians’ dating of the emergence of Christianity in Ethiopia to the fourth century, scholars should explore how Luther’s historical narrative of Ethiopia, and the image of Ethiopia as the Church, informed his ecclesiology.

As these few quotes indicate, Luther held the Ethiopian Church in great esteem. Uncorrupted by the Roman papacy, Ethiopian Christianity, according to Luther, possessed apostolic practices which were absent in Roman Catholicism and which Protestants would “adopt” through their own reading of Scripture: communion in both kinds, vernacular Scripture, and married clergy. Absent, meanwhile, within the Church in Ethiopia were European practices then under critique by various Protestant reformers: the primacy of the Bishop of Rome, indulgences, purgatory, and marriage as a sacrament.

By 1534 Luther, well established in Wittenberg, had engaged in dialogue with other Protestant reformers and Roman Catholic leaders. In that year Luther welcomed a new voice into his ecumenical dialogue: Michael the Deacon, an Ethiopian cleric. Recalling his dialogue with Michael, Luther stated: “We have also learned from him, that the rite which we observe in the use of administration of the Lord’s Supper and the Mass, agrees with the Eastern Church.” Luther expressed his approval of the Church of Ethiopia along with his embrace of Deacon Michael in a letter dated July 4, 1534: “For this reason we ask that good people would demonstrate Christian love also to this [Ethiopian] visitor.” According to Luther, Michael responded positively to his articles of the Christian faith, proclaiming: “This is a good creed, that is, faith” (see Martin Luther, Table-Talk, November 17, 1538 [WA, TR 4:152-153, no. 4126]).

George Posfay concludes: “Both Luther and Melanchthon were anxious to talk to this man [Deacon Michael] to get information about the doctrines which were held as Christian truths in his home Church.” Luther, as Tom Hardt notes, extended full communion to Deacon Michael and the Ethiopian Church, an invitation that Luther notably withheld from the Bohemian Brethren (Hussites) and Reformed Churches connected to Huldrych Zwingli. Luther acknowledged theological “equivalency” with Ethiopian Christianity, and in his 1534 dialogue with Michael, Luther finally had the opportunity to find out whether his attractive theological portrait of Ethiopian Christianity was historically credible.

What seems clear is that Ethiopian Christianity played an important role within Luther’s writings. I also believe that the dialogue between Luther and Michael the Deacon is historically significant. In historical terms, it might be on par with the colloquy between Luther and Zwingli. This ecumenical dialogue between Christian Africa and Europe challenges narratives that cast the Reformation as totally the product of “western” civilization. It also counters other narratives that place Europeans in Africa during this era, without studying African Christians in sixteenth-century Europe.

From this discussion, it appears that Luther did make connections between his Protestant reforms and the Orthodox Church in Ethiopia. For scholars widening their views on Luther’s horizon, they can experiment with narratives that incorporate Luther’s Ethiopia into the story of the Reformation, with Ethiopian Christianity as its forerunner.

- Daniels, David D. “Will African Christians Become A Subject in Reformation Studies?” In Subject to None, Servant of All: Essays in Christian Scholarship in Honor of Kurt Karl Hendel, ed. Peter Vethanayagamony and Kenneth Sawyer (Minneapolis: Lutheran University Press, 2016).

- Webber, David Jay. “‘A Person’s Informal Confession of Faith Must Also Be Considered’: Reflections on the Use of Pastoral Discretion in the Administration of Holy Communion, with Special Reference to the Practice of the Evangelical Lutheran Synod.” Redeemer Lutheran Church. Accessed October 30, 2017.