Headlines in the Detroit Free Press, which reached us recently via USA Today, and the Chicago Sun-Times, from the second-to-last day of last year, were wake-up alarms alerting readers to yet another extremist group of the sort that prospers in these years 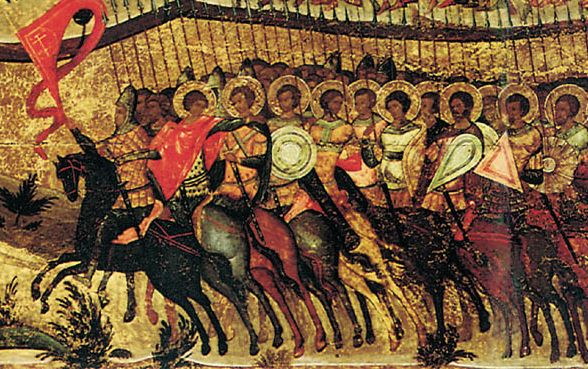 Headlines in the Detroit Free Press, which reached us recently via USA Today, and the Chicago Sun-Times, from the second-to-last day of last year, were wake-up alarms alerting readers to yet another extremist group of the sort that prospers in these years. One local paper tabbed it as “Right-wing group builds empire near Motor City,” which was an accurate but provincial-sounding notice for a national phenomenon. In all those stories the phrase “Church Militant” was prominent, as it was in another December 30th story, this one by Samuel G. Freedman in the New York Times, which goes into details we cannot provide here. Indeed, we might have dozed past the words “Church Militant” altogether had Freedman not moved the concept from the fourth to the 21st century: “‘Church Militant’ Theology Is Put to New, and Politicized, Use.”

Until modern-day right-wing religio-political activists seized the term, twisted its historic meaning, and made it their banner, the now misused “Church Militant” was conveniently shelved in the collection of “old, unhappy, far-off things” like the Crusades, the Inquisition, and Thirty Years’ War. In 1992 Pope John Paul II and company replaced it with the more appropriate term “Pilgrims on Earth.” One of the useful side effects of the current religio-political battles is that they may force commentators, and the rest of us, to trace our way back to vestiges of the olden ways, and understand them. Then, the “Church Militant” referred to spiritual warfare, which was far more serious and soul-destroying than mere Thirty-Year Wars. Some of us grew up with hymnals featuring  “Christian Warfare” sections: “Rise! To Arms!”—rendered pacific by line two, “With Prayer Employ You”; “Fight the Good Fight with All Thy Might”; and “Stand up, Stand Up for Jesus,” which children sang while sitting down in Sunday School.

No longer? In these latter days—as they may well be—of our free republic, the formal term “Church Militant,” which balanced the promise of the “Church Triumphant” in heaven, is now the name for an organization, a “.com” host of websites, a cluster of organizations far from the Motor City, to which publics have to pay attention because it is the announced slogan, animator, and battle cry of some people in high positions. The founder and leader, TV personality and organizer Michael Voris, promotes extremely extreme Catholic worldviews which (he complains) are no longer held or honored by most Catholics. He perceives a “breaking down into forces that believe in God and those that don’t… Largely, [he] would say this is a war of religion versus nonreligion.” Religion, according to his definition, does not include Islam, “Rabbinic Judaism,” and presumably Protestantism, not to mention the views of the vast majority of Catholic leaders and Catholics in general.

Freedman quotes White House chief strategist Stephen K. Bannon, who in a speech at the Vatican in 2014 “called on the ‘church militant’ to fight a global war against… ‘Islamic fascism’ and international financial elites,” etc. Freedman condenses the “Church Militant” agenda to stances against—surprise, surprise!—“globalism, immigration, social-welfare programs and abortion,” and for “an existential war against radical Islam.”

The Church Triumphant was historically promised to outlast the enemies of the Church Militant. Whoever reads and hears of these present-day contentions may well wonder if the words or their promise can outlast the militancies in our present chaos. Still, many “pilgrims on the earth” do continue their pilgrimage, freely.

Image: Detail from Blessed is the Host of the King of Heaven, aka Church Militant, a 16th-century Russian icon traditionally regarded as an allegory for the conquest of the Khanate of Kazan (public domain)
Sightings is edited by Brett Colasacco, a PhD candidate in Religion, Literature, and Visual Culture at the University of Chicago Divinity School. Subscribe to receive Sightings in your inbox twice a week. You can also follow us on Facebook and Twitter.