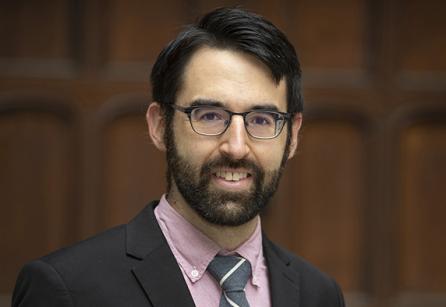 William Schultz is our newest faculty member at Divinity. A historian of American religion with an interest in the intersection of religion, politics, and capitalism, Schultz is currently finishing his first book, Jesus in the Rockies: How Colorado Springs Became the Capital of American Evangelicalism (under contract with UNC Press), which explains how the confluence of evangelical Christianity and free-market capitalism transformed the city of Colorado Springs into an epicenter of American conservatism.

Professor Schultz's classes on American religions are open to qualified graduate students and College students. Students can view the schedule to register; see below for more information.

We asked Professor Schultz to answer some important questions.

What are you most looking forward to about life in Chicago?
There’s so many things, but if I had to pick just one ... spending hours wandering around the Art Institute of Chicago.

What are you most looking forward to about joining us at the Divinity School?
The incredibly vast range of interests among the faculty. I’m trained as a historian, so I’m very much looking forward to talking with – and learning from – ethicists, theologians, anthropologists, and literary scholars.

How did you come to do the work you do?
I wrote a paper on religion and the space race in my second year of grad school. While researching it, I came across the story of Jim Irwin, an astronaut who became an evangelical preacher and moved to Colorado Springs. I followed his trail to the Springs and found in that city everything which fascinated me: evangelical Christianity, the military, aerospace, free-market capitalism, and conservative politics. I’ve spent the past few years figuring out why the Springs became so important to evangelicalism, and what that says about American religion.

What are you working on these days?
I’m finishing my book on Colorado Springs and have just started digging into the second project, which will deal with the history of financial fraud within American religion. There’s no shortage of fascinating characters in this story, from gold-prospecting spiritualists to Catholic priests caught up in shady real estate deals.

Opinions on Chicago-style pizza?
I like it, but I’ll need to sample it several hundred more times to reach a conclusion. I’ve applied for several grants to help fund this critically important research.

What do you put on your hot dog?
Nothing. Like UChicago alum Philip Glass, I’m a minimalist.

Professor Schultz's upcoming classes are on a variety of topics on questions about religion and America.

Why is religion more vital in the United States than in almost any other industrialized nation? This course will address that question by tracing the religious history of America from Reconstruction to the present. We will examine how religion has influenced every aspect of American society, from everyday life to presidential politics. We will look at religion’s role in major events like World War I, the Great Depression, and the Civil Rights Movement. And we will explore how in recent decades the United States has become a nation of incredible religious diversity. This course is grounded in secondary literature; its goal is to introduce students to both the history and historiography of religion in the modern United States.

Should we rename institutions named for people who advocated--or accepted--white supremacy? Should the religious views of judges be subject to public scrutiny? Should religious institutions be exempt from certain public health regulations? These questions are only the latest battlefields in the “culture wars,” the long-running conversation—or, more often, shouting match—about what the United States ought to stand for and how Americans ought to live. This course will explore how Americans have wrestled with questions of morality and national identity since the country’s founding. It will put contemporary struggles in context by examining past cultural conflicts. Potential topics include: the establishment and disestablishment of religion in the early United States; debates over how many and what kind of immigrants to allow into the country; conflicts over the regulation of sexuality; and campaigns to control or prohibit dangerous substances, especially alcohol.

From the Gilded Age to the age of Donald Trump, conservatives Christians have played a major role in shaping American politics and culture. This course will use primary and secondary sources to explore the development of the Christian Right in the United States. We will answer essential questions about the movement: Who joins it? Who leads it? And who funds it? We will examine how conservative Christians approach not only “moral” issues like abortion but also issues like economic regulation and foreign policy. Finally, we will seek to answer the question: What is the future of the Christian Right in an increasingly diverse America?

This course will introduce students to the intersection of religion and capitalism in the United States. Through a variety of primary and secondary readings, we will explore how religious people and institutions have interacted with, affirmed, and challenged American capitalism. We will pay particularly close attention to the alternative moral economics envisioned by religious communities in the United States. The first part of the course will provide a historical introduction to the interplay of religion and American capitalism; the latter part will deal with the role of religion in contemporary debates over work, sustenance, and inequality.