Craft of Teaching Program to Expand 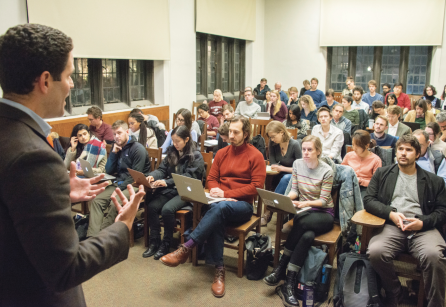 The University of Chicago Divinity School is pleased to announce a generous bequest from the estate of the late John C. Colman that will enable a significant expansion of the Craft of Teaching in the Academic Study of Religion program, the School’s pedagogical training program for doctoral students. The expanded program will be named The John C. and Jane Colman Program in the Craft of Teaching, Leadership, and Service, and will support students in all of our degree programs as they seek to put their disciplinary formation to work in the world.

The establishment of the Craft of Teaching in 2011 under Dean Margaret M. Mitchell underscored the Divinity School’s commitment to preparing outstanding educators in the field of religious studies. For over a decade, the program has sustained a vigorous conversation on pedagogy in the study of religions among doctoral students at the University. This new gift will broaden the program’s mission and scope. In addition to expanding opportunities for a broad array of pedagogical engagements, this extended program will offer career-building opportunities through internships, field experiences, and skill-building modules. It will create opportunities for MA, MDiv, and PhD students in The Divinity School to gain skills relevant to their futures both inside and outside the academy.

The original program was made possible by the vision and support of John C. and Jane Colman, engaged Chicagoans whose generosity has touched many lives. Mr. Colman served as President of the Jewish Federation of Metropolitan Chicago, and in 1995 received the Julius Rosenwald award, the Federation’s highest honor, in part for his work with refuges from the former Soviet Union. He was also president of North Shore Congregation Israel, the first Reform synagogue in the North Shore. Deeply interested in the role of religion in public life, John C. and Jane Colman have long been engaged with the Divinity School. Before endowing the Craft of Teaching, the Colmans endowed the Marty Center Dissertation Seminar, of which Mr. Colman was an original Board member. Their new bequest doubles the resources of the Craft of Teaching, and represents a remarkable commitment to the future of all of our students and our School.

"John worked with six distinguished deans and felt strongly about the exciting and beneficial tasks of the scholars in Swift Hall specifically, and the vital role of religion in public in general," said Jane Colman. "He believed deeply that focusing attention on leadership and service in higher education was crucial to the formation of scholars and scholarship itself. Through John's bequest I am delighted to continue his lengthy dialogue with the Divinity School."

“John and Jane dedicated a great deal of their lives to the betterment of this nation and of the world,” said Divinity School Dean David Nirenberg. “Whether working to solve problems with the international monetary system or to meet the needs of refugees from the USSR, John brought extraordinary intelligence and care to the needs of others. We are fortunate that over their decades of association with the School, he and Jane conveyed that same generous care to thinking about the needs of all of us who study and teach about religion in Swift Hall.”