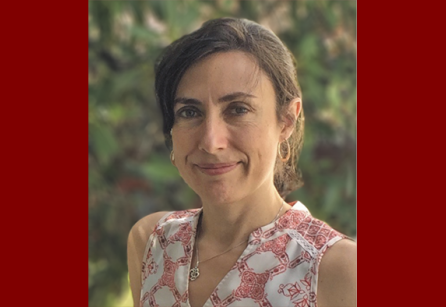 The Divinity School is pleased to announce that Carolina López-Ruiz, Professor of the History of Religions, Comparative Mythology, and the Ancient Mediterranean World in the Divinity School and the Department of Classics, has been awarded this year's Frank Moore Cross book award, given by the American Schools of Overseas Research (ASOR) for her recent book Phoenicians and the Making of the Mediterranean.

Presented annually to the author or editor of the most substantial volume related to the history or religion of the ancient Near and Eastern Mediterranean, the award honors original research published during the last two years, with primary consideration given to historical, epigraphic, textual, and comparative literary studies; or to works that advance and evaluate new methodological approaches to the literary record. Recent winners have included Matthew J. Suriano's A History of Death in the Hebrew Bible (Oxford University Press) and Sidnie White Crawford's Scribes and Scrolls at Qumran (Wm. B. Eerdmans).

In Phoenicians and the Making of the Mediterranean (Harvard University Press, 2021), López-Ruiz writes the first comprehensive history of the cultural impact of the Phoenicians, who knit together the ancient Mediterranean world long before the rise of the Greeks. The Phoenician imprint on the Mediterranean lasted nearly a thousand years, beginning in the Early Iron Age. Following the trail of the Phoenicians from the Levant to the Atlantic coast of Iberia, López-Ruiz offers the first full study of the cultural exchange that transformed the Mediterranean in the eighth and seventh centuries BC. This meticulous document and boldly argued text revises the Hellenocentric model of the ancient world and restores from obscurity the true role of the Near Eastern societies in the history of early civilizations.

Prof. López-Ruiz is a newer member of the Divinity School faculty, having joined us in July of 2022. She is also appointed in The College. She studies ancient Mediterranean cultures through textual and archaeological sources. Her research focuses on comparative mythology (especially cosmogonies and narratives about the gods in Northwest Semitic and Greek traditions) and cultural exchange in the ancient Mediterranean, especially the intersections among Greek, Phoenician, and other cultures around the Mediterranean, including ancient Iberia. Central to her work is the idea that mythological narratives and religious practices act as loci for cultural exchange and provide mechanisms for groups in close contact to negotiate tensions, adopt to change, and bolster their resilience.  She teaches courses in topics related to classical mythology, comparative mythology, ancient Mediterranean religions, and Phoenician language, religion, and culture.

The American Society of Overseas Research is a non-profit 501(c)(3) organization whose mission is to initiate, encourage, and support research into, and public understanding of, the history and cultures of the Near East and wider Mediterranean world, from the earliest times. Learn more about them at their website: https://www.asor.org/.