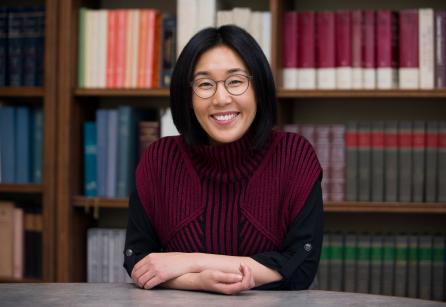 The Divinity School is pleased to announce the Anthony C. Yu Junior Faculty Fellowship, and to announce that Angie Heo, Assistant Professor of the Anthropology and Sociology of Religion, will be its first recipient. Established through a $500,000 gift from Barbara Kirchick Urbut, AM’75, and Michael Urbut, MBA’74, this gift is made in honor of the legacy and memory of the late Carl Darling Buck Distinguished Service Professor in the Humanities and the Divinity School Anthony C. Yu, who passed away in May 2015. The fellowship will support the development of junior faculty in the Divinity School who serve as both excellent researchers and exceptional mentors.

Over his distinguished career, Professor Yu made contributions on figures as wide-ranging as Aeschylus, Dante, Milton, and William Faulkner. His work engaged Chinese religions as well as classic texts of Christianity, Buddhism and Hinduism, and created a dialogue between Eastern and Western traditions in religion and literature that defined his comparative approach in the field. His seminal achievement, a new English translation of Journey to the West, appeared in 1983 to wide acclaim. Not content with this achievement, however, Professor Yu continued to work on the text, and released an updated second edition in 2012.

Even as he made such tremendous contributions, he had a reputation for unmatched attention and generosity towards his students and colleagues. He and his wife Priscilla regularly hosted dinners and gatherings at their home, and would invite students to attend the opera or the symphony. He was known to maintain warm relationships with many of his advisees long after they graduated.

The Anthony C. Yu Junior Faculty Fellowship is a fitting tribute to Professor Yu, designed to instill, encourage, and reward in early-career faculty the traits that made Professor Yu such an important leader within the Divinity School. It will provide our faculty with the resources and support for their research and teaching during the critical early period of a scholar's career.

“Professor Yu’s research left the world a tremendous legacy, and so did his pedagogy,” said Interim Dean of the Divinity School David Nirenberg. “We are all moved by this gift, which will constitute a permanent monument to the grateful memory that Tony’s caring teaching and his deep learning impressed upon so many. ”