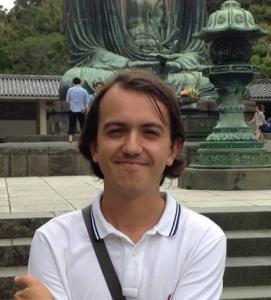 Paride is a PhD candidate in the History of Religions.

My research explores how ideas of Buddhism, modernity, and religion shaped each other in the context of nineteenth and twentieth century Japan and its transnational networks. More specifically, my dissertation analyzes the birth of modern Indology and Buddhist studies in Japan, showing how Japanese Buddhist priests, lay intellectuals, and artists explored Sanskrit texts, early Indian art, and travelled to South Asia in order to respond to the challenges of modernity and of Euro-American approaches to religion. My fascination with the reimagination of ancient Buddhism in both modern Europe and Asia has also led me to develop a second project, which focuses on concepts and imagery of “Silk Road” in twentieth century Japan, where I explore films, literature, tourism to Buddhist sites and the preservation of the Buddhist artistic heritage. These projects show that Buddhism, in addition to become a cultural repertoire to reimagine the role of religion in the modern world, has also become a tool to propose contrasting views of identity and community, from nationalist to cosmopolitan ones.

I was fascinated with Asian religions and thought since high school, when I fell in love with orientalist approaches to Buddhism by reading Hermann Hesse’s Siddhartha as a teenager in search of spiritual answers. My training in East Asian studies at the University of Venice and in religious studies at Padua University forced me to deal with a lot of my orientalist assumptions, which also led me to write a master thesis on Buddhism in Italy in the context of the European history of Orientalism. Looking for PhD programs to pursue my research, the University of Chicago offered the best and most complete one: I could work in the most famous program in History of Religions, while also being encouraged to work interdisciplinary, benefiting from the strong expertise in modern Japan that this University has. The city of Chicago itself attracted me, as it was the place where Asian intellectuals and religious leaders presented their views at the Parliament of World Religions, during the 1893 World’s Columbian Exposition, and it is so religiously and ethnically diverse. I even included a piece of local history in my PhD dissertation, as I discovered that the modern reimagination of India I am studying found echoes in the art produced by the Japanese American community of South Side Chicago in the 1950s. The city offers so much material for anyone who wants to delve into the study of religion.

My favorite course is the Problems Seminar in the History of Religions. This seminar, which was held first at Professor Doniger’s house, and now at Professor Wedemeyer’s, allowed us students in History of Religions to workshop our papers, dissertation proposals and chapters, and to get feedback from peers and faculty. It has not only shaped my approach to the study of religion, but also built a cohort of friends and colleagues that is lasting in the years. I also want to mention a completely different course: “Shamans, Witches, and Werewolves” with Bruce Lincoln. The topic was very far from any of my research interests, and I took it mostly because I loved sitting in classes with Professor Lincoln, where you are continuously challenged to sharpen your arguments and analysis. This course turned out to be not only fascinating, but it opened my eyes on how to critically read both primary sources and scholarship on religion. Reading the same report on an early modern witchcraft trial twice, at the beginning and end of the course, I realized I could see things through the lines I was unable to see at the beginning. This shows how at the Divinity school you can take courses apparently for bare interest, but they can end up shape your way of thinking in unexpected and deep ways.