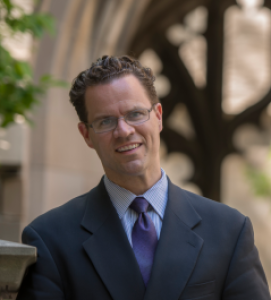 Prof. Hector received the 2013 Faculty Award for Excellence in Graduate Teaching and Mentoring

Faculty Naomi Shenstone Donnelley Professor of Theology and of the Philosophy of Religions; also in the College

Kevin Hector's teaching and research are devoted largely to interpretive questions, particularly (a) how best to understand faith commitments, and (b) how the outworking of such commitments can shed light on broader cultural issues.

Hector's first book,  Theology without Metaphysics  (Cambridge University Press, 2011), thus defends a novel approach to the problem of metaphysics by developing a philosophically-informed and critically-articulated theology of language. The argument, simply stated, is that one of the central premises of contemporary postmetaphysical theology—namely, that language is inherently ‘metaphysical,’ that it therefore shoehorns objects into predetermined categories, and that it must accordingly be kept at a distance from God—assumes metaphysics’ own understanding of language. Drawing on recent work in theology and philosophy of language, Hector renders this assumption optional by developing an alternative account of language and its relation to God, thereby demonstrating that one need not choose between fitting God into a metaphysical framework, on the one hand, and keeping God at a distance from language, on the other.

In his second book, The Theological Project of Modernism: Faith and the Conditions of Mineness (Oxford University Press, 2015), Hector explores the idea of 'mineness,' in the sense of being able to identify with one's life or experience it as self-expressive, by tracing the development of this idea in modern theology.  He argues, accordingly, that theologians such as Kant, Schleiermacher, Hegel, Ritschl, Troeltsch, and Tillich offer accounts of how one's life would have to hang together such that one could identify with it; of the oppositions (e.g., injustice, tragedy, luck) which stand in the way of such hanging-together; of God as the one by whom oppositions are overcome, so that one can have faith that one's life ultimately won't fall apart; and of what such faith would have to be like in order for one to identify with it.

Hector’s third book, Christianity as a Way of Life: A Systematic Theology, is slated to be published by Yale University Press in spring, 2023. Here he argues that we can understand Christianity as a set of practices designed to transform one’s way of perceiving and being in the world or, in sum, as a way of life. He thus looks at practices that reorient us to God (imitation, corporate singing, eating together, friendship, and likemindedness), that transform our way of being in the world (prayer, wonder, laughter, lament, and vocation), and that reshape our way of being with others (benevolence, looking for the image of God in others, forgiveness, and activism). Taken together, the aim of these practices is to transform not only one’s way of perceiving and acting, but one’s very self. Again, this is what Hector has in mind when he claims that Christianity is a way of life. To understand Christianity as a way of life, however, we need to understand more than just these practices. We also need to situate these practices, and so understand them, in light of several other aspects of Christianity, particularly its ideas about the “old,” sinful way of life by which persons have already been formed; what Jesus does to free persons from this old life; the putting-to-death of one’s old, mis-oriented self; and the fulfillment—eternal life—to which Christianity’s way of life orients one. To make sense of Christianity as a way of life thus turns out to require a systematic theology, albeit one of an unusual sort.

In his next book-project, tentatively entitled “Life as a Theological Project: Creating a Usable Past,” Hector focuses on memoirs as a site of theological reflection, not least because memoirs shed light on issues that people wrestle with more generally.  In particular, Hector here focuses on three things: first, the way people try to reconcile themselves to their experiences, to significant persons, and to themselves; second, the role that religion and other ‘communal meanings’ play in facilitating such reconciliation; and third, the way people reconcile themselves to these very communal meanings—often by transforming these meanings or their relationship to them.  As people try to make sense of and navigate their lives, accordingly, they often reconstruct whatever theology they have inherited; working out one’s life story thus becomes a kind of theological project.  In this book, then, Hector hopes to draw insight from such projects, shed light on the way they work, and offer some theological resources to those who are working on them.  (Hector’s research on this project is part of a three-year collaborative grant, “Collaborative Inquiries in Christian Theological Anthropology,” that is funded by the Templeton Foundation.)