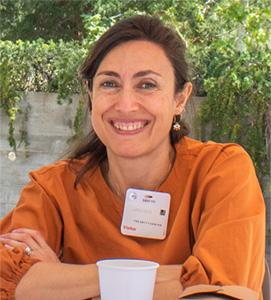 Faculty Professor of the History of Religions, Comparative Mythology, and the Ancient Mediterranean World in the Divinity School and the Department of Classics; also in the College

Carolina López-Ruiz studies ancient Mediterranean cultures through textual and archaeological sources. Her research focuses on two areas: first, comparative mythology, especially cosmogonies and narratives about the gods in Northwest Semitic and Greek traditions; and, second, cultural exchange in the ancient Mediterranean, especially the intersections among Greek, Phoenician, and other cultures around the Mediterranean, including ancient Iberia. Central to her work is the idea that mythological narratives and religious practices act as loci for cultural exchange and provide mechanisms for groups in close contact to negotiate tensions, adopt to change, and bolster their resilience.

López-Ruiz has published extensively on these themes, bringing a multi-cultural perspective to the study of the ancient Mediterranean and the history of religions at large. Her first book, When the Gods Were Born: Greek Cosmogonies and the Near East (Harvard University Press, 2010, translated into Turkish), proposed a new comparative framework for the study of Greek and Northwest Semitic cosmogonies, highlighting the trail of cultural contact with the Northwest Semitic realm revealed in Greek cosmogonies, including Hesiod’s Theogony and the Orphic texts. Her anthology, Gods, Heroes, and Monsters: A Sourcebook of Greek, Roman, and Near Eastern Myths in Translation (Oxford University Press, 2014, second edition 2018) integrates Near Eastern and Classical mythological narratives.

She has published four volumes that consolidate and advance the field of Phoenician studies: Colonial Encounters in Ancient Iberia: Phoenician, Greek, and Indigenous Relations (The University of Chicago Press, 2009, co-edited with Michael Dietler); the monograph Tartessos and the Phoenicians in Iberia (Oxford University Press, 2016, published in Spanish, 2020, second edition 2022; co-authored with Sebastián Celestino); the Oxford Handbook of the Phoenician and Punic Mediterranean (2019, co-edited with Brian Doak); and a recent monograph, Phoenicians and the Making of the Mediterranean (Harvard University Press, 2021), supported by a National Endowment for the Humanities grant (initiative “The Common Good: The Humanities in the Public Square”). This book pushes back against the Hellenocentric framework of much ancient scholarship and places the Phoenicians’ cultural agency front and center in the deep transformations that took place across Iron Age cultures, from Iberia to Cyprus and Israel, in the early first millennium BCE.  This book was awarded this year's Frank Moore Cross book award, given by the American Schools of Overseas Research (ASOR).

López-Ruiz is currently finishing a short monograph on Classical Mythology: Creation and Early Mankind, for the Oxford series on World Mythology in Theory and Everyday Life, which incorporates Near Eastern mythology, and is editing the volume A Cultural History of Western Myth in Antiquity for Bloomsbury’s series A Cultural History of Western Myth.