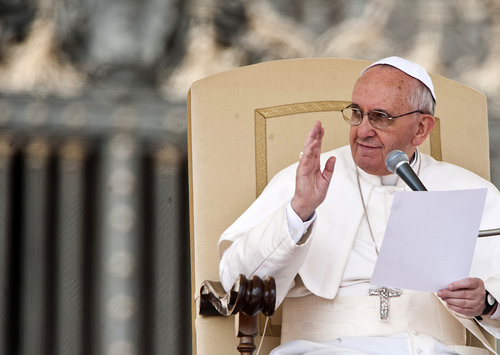 The focus of these headlines—Pope Francis’ “apostolic exhortation”—wiped out all competition for attention among opinion-makers and reporters who deal with significant news in the spheres where religion (once a.k.a. a “private affair”) and everything public meet.

First, this is so because the Pope, any Pope, commands notice as head of the Catholic Church and its more than one-billion adherents. Second, it is so because this Pope, with his refreshing statements, has surprised pro- and con- religion world citizens and observers on the left, right, and center. Third, journalists, commentators, and their readerships and audiences can grow, have grown, weary of the obsessive preoccupation with sex-related issues which has dominated the media for years. They are not alone: the Pope is also weary of what he calls such “obsessive” concerns and says he wants to change the topic. And, fourth, because he has lifted up the often-obscured, but certainly the oldest, ethical issue in the Christian treasury, rooted as it is in the Gospels, the whole New Testament, and the Hebrew Scriptures, which Christians share with Jews.

A student in one of my courses used a ruler to measure how many inches of type in his New Testament were dedicated to various topics. “Homosexuality” took up about two inches in the Pauline writings, and that was that. “Birth control?” Zero. “Abortion?” Zero. I don’t mean to trivialize these subjects, but this student chronicler found that throughout his Bible, the ethical focus for individuals and “the people of God,” more often than not—in many, many inches or feet of measured type—dealt with “economic inequality,” “unequal wealth,” and the “tyranny” of various economic orders or disorders.

Champions of inequality, in their legions of legions, should not quake because a mere pope speaks critically of the way of life they champion or embody. “We” are accustomed or even wired to turn off visions of the poor. Nicholas D. Kristof, in the New York Times(Nov. 27), pointed to a typical finding, this time by Susan Fiske of Princeton: “When research subjects hooked up to neuro-imaging machines look at photos of the poor and the homeless, their brains often react as if they are seeing things, not people.” Fiske’s analysis—and you do not have to be a Princeton psychologist to observe this—“suggests that Americans sometimes react to poverty not with sympathy but with revulsion.”

I like the words “often” and “sometimes” in the previous two sentences, for they suggest that positive visions, criticisms, and appeals “often” and “sometimes” bypass our neuro-imaging blockings and do inspire sympathy. Pope Francis believes that, and “exhorts” others—not only Catholics—to react with sympathy, and then to change, and act on the many levels where inequality goes unnoticed or where notice can do some good.

Some of the media images of Thanksgiving/Black Friday week showed that not all citizens are idolaters of wealth, but displayed their generosity of spirit and how, both personally and through organizations and political approaches, they worked to effect change.

Author, Martin E. Marty, is the Fairfax M. Cone Distinguished Service Professor Emeritus of the History of Modern Christianity at the University of Chicago Divinity School. His biography, publications, and contact information can be found at www.memarty.com.