Look for the Jews 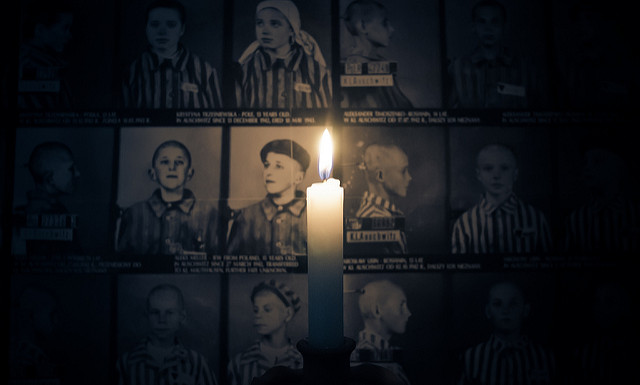 Various news outlets have addressed the fact that the U.S. president’s published statement on International Holocaust Remembrance Day intentionally omits specific reference either to Jews or to anti-Semitism. It does honor “the victims, survivors, heroes of the Holocaust” and acknowledge the unfathomable “depravity and horror inflicted on innocent people by Nazi terror.” As reported by CNN, the White House defends its statement by insisting that “we are an incredibly inclusive group and we took into account all those who suffered.” Social media conversations and public comments about this statement reveal debate over whether it is important to mention Jews and their history, or whether it is sufficient to imply Jews as constituents of a more universal notion of humanity. Given that the Nazis killed many people who were not Jews, perhaps we could let the Holocaust stand for general human suffering brought about by a generic concept of evil.

Many implied Jews populate the public statements and tweets of the current presidential administration and its preceding campaign. If the Holocaust Remembrance Day statement implies Jews but does not name them explicitly, so does the six-pointed star next to an opponent’s face and atop a pile of cash. Equally so does suggesting a conspiracy among certain leaders in the world of business and finance, all of whom are well known to be Jewish. The second and third examples draw upon a history of anti-Semitic tropes without ever using the words “Jew” or “Jewish.” This strategy contrasts with Nazi propaganda, which often included the word “Jude” over an image to be crystal clear.

The omission of Jews from the Holocaust Remembrance Day statement is even more insidious than the imagery of the above examples, because it is more easily explained away by those who would, in fact, denounce overt expressions of anti-Semitism. At worst, the statement ignores or minimizes the fact that the Nazis’ final solution explicitly aimed to exterminate flesh-and-blood Jews from the earth and to expunge their memory from the human story. At best, the statement incorporates Jews and their particular history and identity into a universal notion of humanity. Yet while universalist ideals may sound attractive and may appeal to our best inclinations to unity, too often they serve to advance the perspectives, assumptions, and interests of one group of human beings over those of other groups. In the history of Christianity, for example, one method used by the earliest followers of Christ to define themselves involved contrasting their universal faith, in which “there is no longer Jew or Greek, there is no longer slave or free, there is no longer male and female; for all of you are one in Christ Jesus” (Galatians 3:28), with what they described as the Jews’ slavish adherence to the restrictive prescriptions of the Law (e.g., Galatians 4:21-31). That utmost marker of Jewish particularity, circumcision, became for many Christian authors a symbol of that Jewishness which was nullified or transcended by the death and resurrection of Christ. The Apostle Paul wanted to spiritualize it (Romans 2:29), while the second-century Justin Martyr argued that circumcision had been commanded to mark the Jewish people for deserved suffering. True Israel, Justin taught, belonged to Christians, leaving Jews who did not accept the universal faith of Jesus mired in obsolescence.

Given that we do not have the space to recount a complete and nuanced history of Christian self-definition against Judaism or of the ways in which such rhetoric has informed actions and policies against flesh-and-blood Jews, let us turn to an insight from linguistic theory regarding the way the human brain and human cultures tend to assign normative weight to certain members of a group. Statements that appear to promote “inclusive,” universalist notions of humanity without acknowledging important human differences often advance the interests of one group as prototype while subtly undermining the equal membership of other groups. With respect to the category “bird,” for instance, one could assume that American robins or songbirds in general represent all birds, thereby pushing other groups like owls, penguins, and flamingos to the margins. Scholars of race, gender, anti-Semitism, postcolonial theory, etc., have called attention to how such strategies have similarly caused certain subgroups to attain prototypical status within the category “human being.” Statements such as the one produced by the White House for Holocaust Remembrance Day that omit Jews—that subgroup of human beings which was the explicit target of the Holocaust and which has so often been singled out for discrimination and aggression precisely because of its particularity—fail to worry many people of goodwill because the language sounds inclusive and universal. Nevertheless, avowedly anti-Semitic organizations have applauded this statement that omits Jews just as they have voiced their approval of campaign images drawn from anti-Semitic tropes. For some proponents of anti-Semitic policies, it has not been a question of centrality to the category “human being,” but a question of membership itself. Whether they are insinuated to evoke a history of fearful stereotypes, or whether they are omitted in favor of claims to universality, we should be wary of implied Jews.

- Milbank, Dana. “Anti-Semitism is no longer an undertone of Trump’s campaign. It’s the melody.” The Washington Post. November 7, 2016.

- Tapper, Jake. “WH: No mention of Jews on Holocaust Remembrance Day because others were killed too.” CNN. Updated February 2, 2017.

See All Articles by Erika Tritle