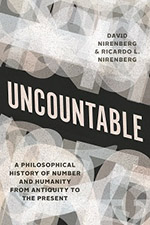 In Uncountable: A Philosophical History of Number and Humanity from Antiquity to the Present, David Nirenberg and Ricardo L. Nirenberg explain how numbers triumphed as the basis of knowledge and how these numbers compromise our sense of humanity. The work ranges across disciplines, putting mathematicians, philosophers, scientists, and literature in conversation with each other to argue that our knowledge of mathematics has structured much of what we think we know about ourselves as individuals and communities, shaping our psychologies, sociologies, and economies, and to argue for the problems this poses. 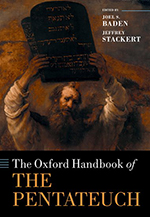 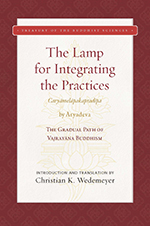 The Lamp for Integrating the Practices (Caryamelapakapradipa):The Gradual Path of Vajrayana Buddhism by Aryadeva, in this edition thoroughly annotated and translated by Christian K. Wedemeyer, is a systematic and comprehensive exposition of the most advanced yogas of the Esoteric Community Tantra (Guhyasamaja-tantra) as espoused by the Noble (Nagarjuna) tradition, an influential school of interpretation within the Mahayoga traditions of Indian Buddhist mysticism. This edition includes an introductory study discussing the history of the Guhyasamaja and its exegetical traditions, surveying the scriptural and commentarial sources of the Nagarjuna tradition, and analyzing in detail the contents of the Lamp, as well as a detailed, trilingual glossary. 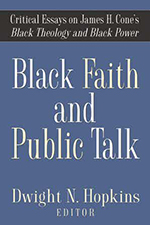 When Cone wrote Black Theology and Black Power, he signaled to the world that the American black faith tradition would no longer recognize the confines of the church walls as the extent of its purview in society. Black Faith and Public Talk, a collection of critical essays on James H. Cone's Black Theology and Black Power edited by Dwight N. Hopkins, continues Cone's theme of power in the public realm and examines the economic, political, cultural, gender, and theological implications of black faith and black theology. 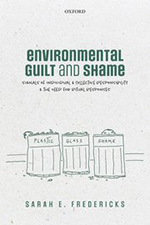 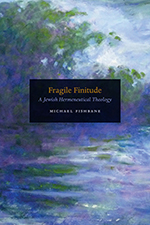 It is through the symbolic forms of language that the human world of value is revealed; in Fragile Finitude: A Jewish Hermeneutical Theology, Michael Fishbane clears new ground for a theological life through a novel reinterpretation of the Book of Job. He offers a contemporary engagement with the four classical types of Jewish Scriptural exegesis. The first focuses on worldly experience, the second on communal forms of practice and thought in the rabbinical tradition, the third on personal development, and the fourth on transcendent, cosmic orientations. 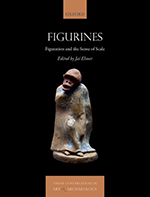 Figurines: Figuration and The Sense of Scale, edited by Jaś Elsner, presents comparative case-studies of figurines in different ancient historical cultures, offering new accounts from China, Mesoamerica, Greece, and the late antique Mediterranean, examining the historical contexts for the end of figurine production and the impact of ideological change on the archaeological record. Accessibly written by four leading scholars working at the intersection of archaeology and the history of art, this volume is an attempt to put the category of the figurine on the table as a key conceptual and material problematic in the art history of antiquity. At stake are issues of figuration and anthropomorphism, miniaturization and portability, one-off production and replication, and substitution and scale at the interface of archaeology and art history. 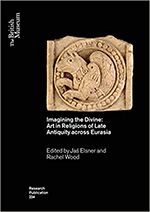 Imagining the Divine: Art in Religions of Late Antiquity across Eurasia, edited by Jaś Elsner and Rachel Wood, brings together scholars of the art and archaeology of late antiquity (c. 200−1000), across cultures and regions reaching from India to Iberia, to discuss how objects can inform our understanding of religions. This volume specifically seeks to explore the ramifications of placing objects first and foremost in the comparative study of religions in late antiquity, and to consider the potential for interdisciplinary conversation to reinvigorate the field. 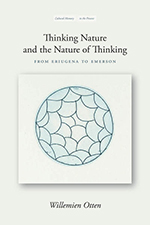 In Thinking Nature and the Nature of Thinking: From Eriugena to Emerson, Willemien Otten puts medieval Irish theologian John Scottus Eriugena (810–877) into conversation with American philosopher Ralph Waldo Emerson (1803–1882). Challenging the biblical stewardship model of nature and histories of nature and religion that pit orthodoxy against the heresy of pantheism, Otten reveals a line of thought that has long made room for nature's agency as the coworker of God. Embracing this more elusive idea of nature in a world beset by environmental crises, she suggests, will allow us to see nature not as a victim but as an ally in a common quest for re-attunement to the divine. 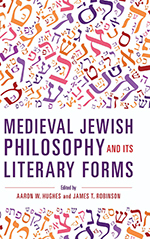 Medieval Jewish Philosophy and Its Literary Forms, edited by James Robinson and Aaron W. Hughes, considers Jewish philosophy in the medieval period and the connections that medieval Jewish thinkers made between the literary, the exegetical, the philosophical, and the mystical to shed light on the creativity and diversity of medieval thought. As they broaden the scope of what counts as medieval Jewish philosophy, the essays collected here consider questions about how an argument is formed, how text is put into the service of philosophy, and the social and intellectual environment in which philosophical texts were produced. 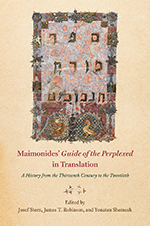 Maimonides’ Guide of the Perplexed in Translation: A History from the Thirteenth Century to the Twentieth, edited by James T. Robinson, Josef Stern, and Yonatan Shemesh, is the first volume to tell the story of the translations and translators of Maimonides’ Guide and its impact in translation on philosophy from the Middle Ages to the present day. This interdisciplinary collection of essays first traces the history of the translations of the Guide, from medieval to modern renditions and then surveys its influence in translation on Latin scholastic, early modern, and contemporary Anglo-American philosophy, as well as its impact in translation on current scholarship.

Devotion: Three Inquiries in Religion, Literature, and Political Imagination suggests different ways to characterize the object of devotion and the stance of the devout subject before it. What brings scholars of religion Sarah Hammerschlag ( Professor of Religion and Literature, Philosophy of Religions and History of Judaism), Constance M. Furey, Amy Hollywood together in this volume is a shared conviction that “reading helps us live with and through the unknown,” including times like these. They argue that what we read and what reading itself demands of us open new ways of imagining our political futures and our lives.

Reasons and Lives in Buddhist Traditions: this collection of essays pays tribute to Matthew Kapstein, Numata Professor of Buddhist Studies, a luminary in the field, by exemplifying some of the diverse work in Buddhist and Asian studies that has been impacted by his scholarship and teaching. Engaging matters as diverse as the legal foundations of Tibetan religious thought, the teaching careers of modern Chinese Buddhists, the history of Bhutan, and the hermeneutical insights of Vasubandhu, these essays  are offered as testament to a singular scholar and teacher whose wide-ranging work is unified by a rare intellectual selflessness. Edited by Daniel A. Arnold, Associate Professor of Philosophy of Religions.

The Mystics of al-Andalus: Ibn Barrajān and Islamic Thought in the Twelfth Century by Yousef Casewit, Assistant Professor of Qur'anic Studies, focuses on the twelfth century CE, a watershed moment for mysticism in the Muslim West. In al-Andalus, the pioneers of this mystical tradition, the Mu'tabirun or 'Contemplators', championed a synthesis between Muslim scriptural sources and Neoplatonic cosmology. Ibn Barrajān of Seville was most responsible for shaping this new intellectual approach, and is the focus of Casewit's book.

The Iranian Metaphysicals: Explorations in Science, Islam, and the Uncanny by Alireza Doostdar, Assistant Professor of Islamic Studies and the Anthropology and Sociology of Religion, shows that metaphysical experimentation lies at the center of some of the most influential intellectual and religious movements in modern Iran. These forms of exploration have not only produced a plurality of rational orientations toward metaphysical phenomena but have also fundamentally shaped what is understood as orthodox Shi‘i Islam, including the forms of Islamic rationality at the heart of projects for building and sustaining an Islamic Republic. Winner of the 2018 Albert Hourani Book Award from MESA, the Middle East Studies Association.

Broken Tablets: Levinas, Derrida, and the Literary Afterline of Religion by Sarah Hammerschlag, Associate Professor of Religion and Literature, Philosophy of Religions and History of Judaism, is a reexamination of Derrida and Levinas's textual exchange. The book not only produces a new account of this friendship but also has significant ramifications for debates within Continental philosophy, the study of religion, and political theology.

The Political Lives of Saints: Christian-Muslim Mediation in Egypt by Angie Heo, Assistant Professor of the Anthropology and Sociology of Religion journeys into the quieter corners of divine intercession to consider what martyrs, miracles, and mysteries have to do with the routine challenges faced by Christians and Muslims living together under the modern nation-state. Drawing on years of extensive fieldwork, Angie Heo argues for understanding popular saints as material media that organize social relations between Christians and Muslims in Egypt toward varying political ends. With an ethnographer’s eye for traces of antiquity, she deciphers how long-cherished imaginaries of holiness broker bonds of revolutionary sacrifice, reconfigure national sites of sacred territory, and pose sectarian threats to security and order. A study of tradition and nationhood at their limits, The Political Lives of Saints shows that Coptic Orthodoxy is a core domain of minoritarian regulation and authoritarian rule, powerfully reversing the recurrent thesis of its impending extinction in the Arab Muslim world.

What do African American men have to do with gender? In Black Theology: Essays on Gender Perspectives, Professor of Theology Dwight N. Hopkins draws on over thirty-five years of wrestling with these questions. Too often gender is seen as a "woman's only" discussion. But in reality, men have a gender too. Some say it is biological; others claim it has to do with socialization. Hopkins's career has focused on defining what a black American man is, and how he builds bridges of support and engagement with women.

Varieties of Gifts: Multiplicity and the Well-Lived Pastoral Life is by Cynthia Gano Lindner, Director of Ministry Studies. The practice of ministry in our rapidly changing, increasingly diverse context is a complicated business. Varieties of Gifts highlights the stories of ministers who thrive in this environment, offering inspiration to readers—ministers, seminary students, and people who care for them—on engaging their own multiplicity to build healthy, sustainable ministry.

Brève apologie pour une moment catholique: Jean-Luc Marion, Andrew Thomas Greeley and Grace McNichols Greeley Professor of Catholic Studies and Professor of the Philosophy of Religions and Theology, explores the possibility that this could be an extraordinary moment in French history. 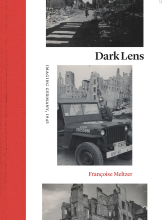 In Dark Lens: Imaging Germany, 1945, Françoise Meltzer, Edward Carson Waller Distinguished Service Professor in the Humanities and Professor of Philosophy of Religions, explores questions  around the images of war ruins in Nazi Germany to investigate problems of aestheticization, the representation of catastrophe, and the targeting of civilians in war.

Friends and Other Strangers: Studies in Religion, Ethics, and Culture by Richard B. Miller, Laura Spelman Rockefeller Professor of Religious Ethics, seeks to chart and expand the field of religious ethics by exploring the implications of taking a cultural turn in the humanities and social sciences.

Emptiness and Omnipresence: An Essential Introduction to Tiantai Buddhism by Brook A. Ziporyn, Professor of Chinese Religion, Philosophy, and Comparative Thought, puts Tiantai into dialogue with modern philosophical concerns to draw out its implications for ethics, epistemology, and metaphysics. Ziporyn reveals the profound insights of Tiantai Buddhism while stimulating philosophical reflection on its unexpected effects