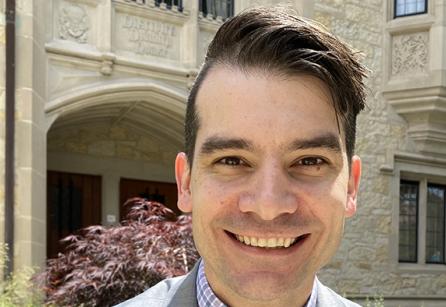 Mark Lambert received his Ph.D. in Theology in 2021. Currently a Teaching Fellow in the Divinity School, Mark will be teaching in the "Global Society" Core sequence, the "Self, Culture, and Society" Core sequence, and his own Religious Studies course, "Religion, Medicine, and the Experience of Illness."  Mark previously taught the Religion and Medicine course as part of an Alma Wilson Teaching Fellowship; the course examines the relationship between religion and medicine from a multidisciplinary perspective while also including field education components.

Mark's own work draws upon historical theology, medical ethics, and medical history in an effort to understand and approach stigmatic illness. We spoke with him about his work and its relevance to the present day.

How does a scholar of religion become interested in leprosy?

I started out interested in the history of the Crusades, an interest stimulated by a study abroad trip to the Middle East where the consequences of this moment in time remain vividly present. But I was soon drawn to the singular figure of Baldwin IV, the sixth crusader king, who despite suffering publicly from leprosy was still esteemed enough to be buried in the Church of the Holy Sepulchre. The occurrence was incompatible with everything I (thought) I knew about medieval leprosy. Soon, the more I discovered about leprosy during the Middle Ages, the more I became intoxicated with the intricacies of medieval Christianity and its shockingly nuanced attitudes towards a disease as complex as leprosy. Most surprising, I increasingly detected uncanny continuities between historical responses to leprosy and more modern diseases, particularly HIV/AIDS. Thus, although I've left my fascination with the Crusades behind, my interest in the recrudescence of historical paradigms continues. Still, I never could have imagined I would end up writing an entire dissertation on the topic of leprosy.

In my dissertation project, I argue that the historical theologizing of leprosy alongside sacraments such as the Eucharist provides key ethical insights for how religious communities today approach stigmatic illness, e.g., HIV/AIDS, mental illness, even COVID-19. My sources are as diverse as premodern Franciscan treatises, biblical commentaries of Protestant reformers, and personal letters of Father Damien de Veuster regarding his work at the leprosy colony on Molokai, Hawaii. Despite spanning from the 13th century to the 19th, my sources are unified by the universal experience of illness. They also reveal a persistent theological preoccupation with questions of perception or what the presence of disease reveals about divinity. And in one of my more surprising findings, I demonstrate that medical knowledge was historically a vital part of the epistemological repertoires of theologians. Moreover, this engagement with medical theory could critically augment theological inquiry with consequences for the ethical constitution of communities and even the contours of public health policies.

Students in Swift Hall also know you are passionate about promoting mental wellness and reducing stigma associated with mental illness.

For much of my time at the Divinity School I've served as a representative to the Student Health Advisory Board, which has allowed me to have a voice in the implementation of health policy on campus. More recently, I was able to translate some of this passion through a new position on the DSA Board as the inaugural "wellness chair." Of course, the pandemic seriously thwarted some of our new initiatives but I remain encouraged that I have a lot of brilliant colleagues who share the same passion. Honestly, it's hard for me to identify if my research interests inform my SHAB/DSA work or if it's actually the other way around.

Working on the project while a global pandemic was unfolding has been quite jarring: leaving aside all of the shared anxieties-anger-struggles-etc. the pandemic has presented, there's been times when I have seen the affirmation of the relevance of my work. Other times, I have wanted a little less of my life to be consumed with thinking about disease and illness. But three things have really stood out.

During the spring and summer, I was finishing a chapter on John Calvin, immersed in the Protestant reformer's writings about medicine. He and fellow reformer, Martin Luther, both harbored immense esteem for the medical arts and against the backdrop of recurrent plague outbreaks, harshly criticized the Christians who openly dismissed medical advice. While I was writing this chapter I was reading about churches in Chicago that brazenly flouted health measures—not to mention what was occurring on the national scale with the former president's support.

In a talk recently, I noted that owing to its prominent profile in the Bible, the medical community has never had an interpretive monopoly on leprosy: this disease has always possessed a public, easily manipulated profile. Because of this, leprosy has often become entangled with racial politics. This was certainly the case in Molokai, Hawaii where the policies of mandatory segregation overwhelmingly affected the indigenous Hawaiian population. But leprosy also became instrumentalized in early American, xenophobic rhetoric about Chinese immigrants (particularly in San Francisco), and more recently, in the political right's fearmongering about South American migrant caravans. I was saddened and outraged to see this toxic pattern repeat with respect to COVID-19 and the recrudescence of blatant racism against Asian Americans.

Finally, there are obvious resonances between leprosy, where sufferers were historically separated, marginalized from their communities/families/loved ones, and our contemporary experiences with COVID-19. To just reflect on the example of Father Damien, who worked at Molokai and was later admitted as a patient after he contracted leprosy himself, how he theologically conceived of community changed by necessity and (what I find especially fascinating) he was forced to adapt how he conceived of and performed certain sacraments owing to the realities presented by leprosy. In parallel fashion, we've observed how communities of faith have had to reimagine their conception of community and have had to adapt how they perform certain rituals. But Father Damien provides us with two further insights. The first: Damien's experience of leprosy—and especially how he's remembered—was quite different from the experience of his indigenous co-sufferers by virtue of racial status. That is something that has also been painfully true of COVID and a reality that deserves even greater vigilance on our part. Second: Damien, much to the chagrin of his religious superiors and the colonial Board of Health, become stubbornly passionate about advocating for improvements to Hawaiian health policies pertaining to leprosy. In fact, Damien was unafraid of appealing to his religious authority—and growing celebrity—if it meant securing better medical care for the residents of Molokai. This pandemic has exposed and been exacerbated by many of our societal ills, but now the notion that healthcare is a matter of personal, private responsibility is painfully foolish and unethical. Hopefully, more Americans have realized that public health affects, well everyone. After the pandemic has passed, I hope in turn that academia, theologians, and communities of faith will recognize public health debates as deserving their attention.