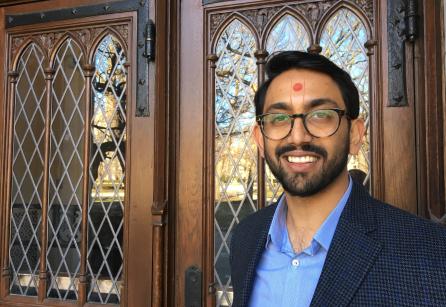 Viraj Patel has always been fascinated with – and frustrated by – the challenge of expressing a Hindu identity as an Indian-American.

Even as a child growing up in the 1990s in a small town near Allentown, Pennsylvania, the first generation Indian-American recalls struggling when trying to describe his identity and religious practices to non-Hindu friends.

“There was always this conflict in my life between being able to assert a Hindu-American identity and an Indian identity, but also assimilating,” Patel says.

His childhood was typically American in many ways. He played baseball and was on the track team and marching band. At the same time, he inevitably found himself having to explain to friends why he did not eat onions or garlic or why he and his family made the three-hour round trip every weekend to attend the nearest Hindu temple.

The same challenges followed him when he left home to study pre-med at Pennsylvania State University. Whenever he tried explaining his faith to non-Hindus, Patel says, he struggled to articulate the full scope of his heritage. “The message didn’t always get across as well as it could,” he says. “I’m not sure I had the vocabulary [or] the intellectual tools to articulate that identity.”

His quest to find a way to express that identity eventually led Patel to change his course of study from medicine to theology.

The turning point came after Patel earned a BS in Health Policy and Administration and pre-med at Penn State in 2010 and a Master of Public Health from Thomas Jefferson University in 2013.

He was about to enter medical school at Thomas Jefferson when a friend who understood Patel’s fascination with Hindu studies and identity raised the possibility of pursuing the study of religion as a career. Intrigued, Patel sought out advice and was told he needed to learn some languages and apply to a leading divinity school. Already fluent in Gujarati, Patel started studying Sanskrit and worked to improve his Hindi.

Patel was drawn to the University of Chicago Divinity School and its multifaith programs and, more specifically, to the opportunity to study under now-retired professor Wendy Doniger, an Indologist and a scholar in the history of religions. He earned an MA in 2015 and an MDiv last year and is now in his first year of pursuing a PhD.

“People here are so much more willing to experiment. That's what I love about it,” Patel says. “All the faculty have a unique way of looking at the study of religion that doesn’t box itself in.”

Under the supervision of his PhD adviser, Christian Wedemeyer, a professor of the history of religions, Patel is crafting a dissertation subject.

It’s still a work in progress, according to Patel, but the subject would likely address in some way the history of how Western academic institutions study Hinduism and how that contrasts with the way they study Abrahamic religions.

“There’s no sense of ‘what are the big questions in the field’?” Patel says. “I’m trying to figure out why that is and how that might be changed.”