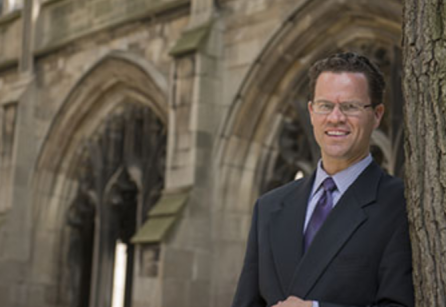 Kevin Hector, Associate Professor of Theology and of the Philosophy of Religions, has been awarded a grant to study Memory and Personal Identity from the Templeton Foundation as part of a larger three-year collaborative project, titled 'Collaborative Inquiries in Christian Theological Anthropology.'

Regarding the project, he says: “My next major project is part of a three-year, five-million-dollar grant that brings together a dozen scholars of religion who are pursuing research that engages substantially with science. My project is to investigate the role that memory plays in the construction of personal identity and, in connection with this, the light that this can shed on theological notions like confession, testimony, and ‘telling one’s story,’ as well as the light that the latter can shed on the former.”

Hector has been a member of the University of Chicago's faculty since 2007, during which time he has published both Theology without Metaphysics (2011) and The Theological Project of Modernism: Faith and the Conditions of Mineness (2015). He was the recipient of the University's Faculty Award for Excellence in Graduate Teaching and Mentoring in 2013. His scholarly work on both traditional and modern theology focuses on how to best understand faith commitments and how the outworking of faith commitments can shed light on broader cultural issues.