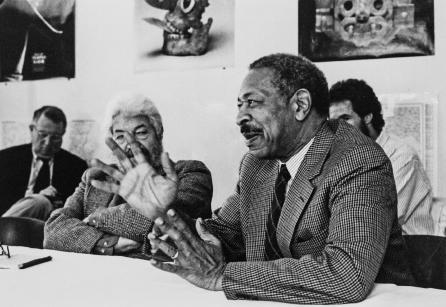 Charles H. Long, a distinguished alumnus of and former faculty member at The University of Chicago Divinity School has died at the age of 93.

Dr. Long received his DB in 1953 and his PhD in 1962 (his doctoral dissertation was entitled “Myth, Culture and History in West Africa”). A student of Mircea Eliade, Joseph Kitagawa, and Joachim Wach, Dr. Long was a preeminent figure in the study of the history of religions, including American and Black Religions.

He served the Divinity School as Dean of Students (1957-1960) and as a faculty member (rising to full professorship) in the History of Religions area. During his time here he also chaired the Committee on African Studies and was one of the founding editors of the journal History of Religions, among other professional activities.

Elected president of the American Academy of Religion in 1973, in 1974 he accepted the Kenan Professorship at The University of North Carolina Chapel Hill. At the time of his death he was Emeritus Professor of Religious Studies at the University of California-Santa Barbara. During his distinguished career he also served as president of the Society for the Study of Black Religion, edited book series and sat on editorial boards for leading scholarly journals, and of course continued to write, deliver lectures, and teach.

Among his many honors were an honorary doctorate from Dickinson College, a Guggenheim fellowship, and the Divinity School’s Alumnus of the Year Award in 1984.

In works including the now-classic Significations: Signs, Symbols, and Images in the Interpretation of Religion (1986) he explored issues of encounter, of cultural misunderstandings, and of creation, challenging scholars and the wider public to examine the limitations of current thought.  One of the great historians of religion at The University of Chicago, his students are today teaching not only in the United States but in Africa, Japan, and Mexico.

David Carrasco, the Neil L. Rudenstine Professor of the Study of Latin America at Harvard University – and the Divinity School’s Alumnus of the Year in 2014 – studied with Professor Long. He recalls that Dr. Long “had a genius at showing us not only how to think about religion but where such thinking could carry you, how deeply it could reveal the interiority of one's own mindsets.  When he lectured his words and thought seemed to take on musical forms-sometimes the blues, other times jazz and often classical.”

“He set a rigorous hermeneutical standard for all his students and especially the students of color who found in his voice, writings and wisdom the meanings of what he called the secret of creation,” said Carrasco.  “He put the History of Religions into a critical dialogue with theology, the study of Black religion in America and post-colonial studies and showed us, however, that the powers of religion could not be reduced to political realities.”

Charles Houston Long was born in Little Rock, Arkansas.  He served in the United States Army Air Forces in World War II, was ordained as a minister by the American Baptist Convention, and raised four children with his wife, Alice Freeman Long.

In lieu of flowers, charitable donations, or memorials in Dr. Long’s name, such gifts can be made to the SECU Jim & Betsy Bryan Hospice Home of UNC Health Care. Please contact Brad Wilson, Director of Development at 984-974-4467 or Brad_Wilson@med.unc.edu to discuss ways to give to UNC Hospice.