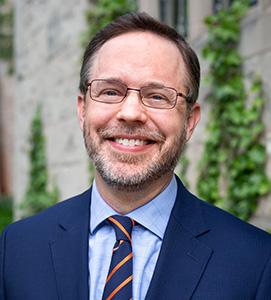 Faculty, Staff Director of MA Studies and Professor of Hebrew Bible; also in the College and the Greenberg Center for Jewish Studies; Associate Faculty in the Department of Classics and the Department of Near Eastern Languages and Civilizations

Jeffrey Stackert is a biblical scholar who situates the Hebrew Bible in the context of the larger ancient Near Eastern world in which it was composed. His research focuses especially on the composition of the Pentateuch, ancient Near Eastern prophecy, cultic texts, and ancient Near Eastern law. His first book, Rewriting the Torah: Literary Revision in Deuteronomy and the Holiness Legislation (Mohr Siebeck, 2007), addresses literary correspondences among the biblical legal corpora. It was honored with the 2010 John Templeton Award for Theological Promise. His second book, A Prophet Like Moses: Prophecy, Law, and Israelite Religion (Oxford University Press, 2014), analyzes the relationship between law and prophecy in the pentateuchal sources and the role of the Documentary Hypothesis for understanding Israelite religion. Stackert’s latest monograph, Deuteronomy and the Pentateuch (Yale University Press, 2022), makes a new argument for what Deuteronomy is, how and when it originated, and how it should be read. Stackert has also edited several volumes, including the new reference work, The Oxford Handbook of the Pentateuch. He is currently working on a commentary on the biblical book of Deuteronomy (with Joel S. Baden) and a monograph on pentateuchal Priestly literature.

Stackert has published articles in various volumes and journals, and he serves on the editorial boards of the journals Die Welt des Orients and The Catholic Biblical Quarterly. He is co-general editor of the open access series Ancient Near East Monographs, published by the Society of Biblical Literature Press. Stackert also leads a digital humanities project, CEDAR: Critical Editions for Digital Analysis and Research (cedar.uchicago.edu), which is funded by grants from the Neubauer Collegium for Culture and Society and the E. Rhodes and Leona B. Carpenter Foundation