The 2022 Nuveen Lecture by Tahera Qutbuddin 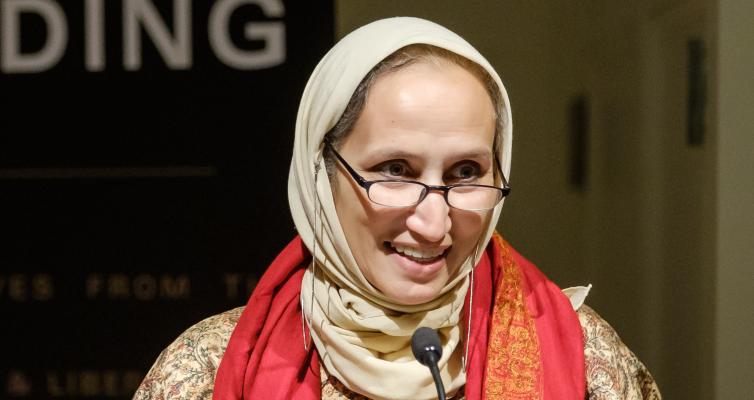 The Divinity School is pleased to announce that Tahera Qutbuddin, Professor of Arabic Literature, will deliver the 2022 Nuveen Lecture. Professor Qutbuddin's lecture will be entitled "Early Islamic Oration: Rhetoric, Religion, and Ritual."

The lecture will be Thursday, October 20, 2022  at 4:30pm in Swift Lecture Hall. We will also offer a livestream of the event. A dinner reception will follow.

In her lecture, Qutbuddin will consider Arabic-Islamic oration across different social domains in its foundational early period and situate religious speech within them, showing that boundaries between religion and other spheres of life were fluid in the early period. Drawing on ten years of research for her recently published book, Arabic Oration: Art and Function (Brill, Handbook of Oriental Studies series, 2019), she will discuss the major features of classical Arabic oration, with a focus on religion, ritual, and the rhetoric of orality.

Across the mosques, homes, battlefields, and open town spaces of the Middle East in the 7th and 8th centuries AD, religion, politics, and aesthetics coalesced in the richly artistic public performance of spontaneous Arabic oration (khutba). Exquisite in rhetorical craftsmanship, interactive speeches and sermons by Muhammad, ʿAlī, and other political and military early Muslim leaders were also the major vehicle of policymaking and persuasion, and the primary conduit for dissemination of ethical, religious, and legal teachings. The Friday sermon that is an intrinsic part of Muslim ritual across the globe today has a long history rooted in the first Friday sermon delivered by the Prophet Muhammad in Medina, and more broadly in these multifunctional orations of the early Islamic world.

Professor Qutbuddin is a scholar of classical Arabic literature and Islamic studies, focusing on intersections of the literary, the religious, and the political in classical Arabic poetry and prose. Her research interests include Arabic oratory and Islamic preaching; literary features and symbolic exegesis of the Qur’an; ethical hadith traditions of the Prophet Muhammad; sermons of Imam Ali ibn Abi Talib; broad features of classical Arabic poetry; women from the family of the Prophet; Fatimid and Tayyibi (Da’udi Bohra) Shi’I doctrine, history, and literature, particularly the thought of al-Mu’ayyad al-Shirazi and Sayyidna Tahir Sayf al-Din; and Arabic in India.

Since 2002 Professor Qutbuddin has been Professor of Arabic literature and Islamic studies in the Department of Near Eastern Languages and Civilizations. She is also a member of the Center for Middle Eastern Studies, associate faculty of the Divinity School, and was Chair, for ten years,  of the undergraduate major Interdisciplinary Studies in the Humanities. She obtained her PhD and MA from Harvard University, Tamhidi Magister and her BA from Ain Shams University in Cairo.

Her latest monograph, Arabic Oration: Art and Function (Brill, 2019), was awarded the prestigious Sheikh Zayed Book Award for 2021. Qubuddin presents a comprehensive theory of this preeminent genre in its foundational oral period, 7th-8th centuries AD, and discusses its continuing influence on the contemporary Muslim sermon. Her current projects include editing and translating al-Sharif al-Radi’s compilation of Ali’s sermons titled Path of Eloquence (Nahj al-balaghah), as well as a monograph on Ali’s religio-political career and ethical preaching based on his sermons and epistles, supported by a Guggenheim Fellowship (2020-21).

Her graduate students work on a range of subjects: the reader in Jahiz’s epistles, tribal poetics in pre-Islamic Arabia, authorship in Ma’arri’s writings, race and gender in Sirat Dhat al-Himma, and the role of hadith in Arabic philology. She also serves on the dissertation committees of students working in the fields of Islamic history, Islamic Thought, and Persian Literature, as well as students in the Department of Comparative Literature and the Divinity School.

John S. Nuveen was one of Chicago’s most influential business leaders and an active civil and cultural leader with ties to many educational institutions. At the University of Chicago, he served as chairman of the University’s Alumni Association and as a trustee of the Baptist Theological Union, which established the Nuveen lecture in 1972 and manages an endowment that supports the University of Chicago Divinity School. Each year, a prominent member of the University's faculty is invited by the Divinity School to deliver the lecture. Past lecturers have included Wu Hung, Janet Rowley, Jonathan Lear, and Leon Kass.