Rev. Dr. William Barber and the Sound of Transcendence

In his address to the 2016 Democratic National Convention, the Rev 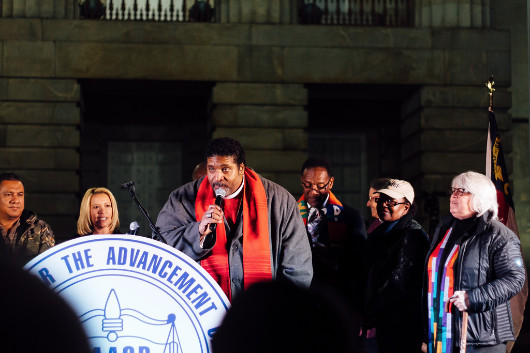 In his address to the 2016 Democratic National Convention, the Rev. Dr. William J. Barber II, then president of the North Carolina Conference of the NAACP and leader of the Moral Mondays Movement, proclaimed, “like our forefathers and foremothers, we are called to be the moral defibrillators of our time.” Likening the pursuit of justice to the regulation of an irregular heartbeat, Barber’s words offer a valuable window into the politics of prophetic preaching.

While Barber’s leadership of the Moral Mondays Movement has brought him to national prominence and granted him entry into many venues, including the stage of the DNC, Barber contends that he is “not a politician, [but] a pastor.” In his words,

[t]he job of a pastor is to touch people where they are hurting and to do what is possible to bind up their wounds. You can only do this sort of work locally—among people whose names you know and who, likewise, know you. But you cannot do it honestly without at some point becoming a prophet. Something inside the human spirit cries out against the injustice of inequality when you know people who have to choose between food and medicine in a country where CEOs make more in an hour than their lowest-paid employees make in a month.

While Barber identifies himself as a pastor, his preaching embodies a kind of political strategy. This strategy does not consist in “political realism,” which he argues tends to silence dissent, but instead faith, the kind that makes “it possible for a moral voice to cry aloud and spare not.” This kind of belief, he writes, is “not blind faith,” but “conviction that [takes] the long view. Even when they could not see now how justice would prevail, generations of dissenters knew that it would. Even when they felt alone in the moment, they knew they were part of a ‘great cloud of witnesses’ in the long movement toward justice.”

I argue that Barber’s analysis reveals aspects of the public theology he seeks to construct. Further, I am intrigued by his suggestion that faith can serve as a kind of strategy and fuel for protest, for it points to a more central problematic. Namely, while Barber’s discourses and actions focus on fusion, joining diverse groups of people in pursuit of common objectives, he recruits aesthetic and ritual resources that are oddly specific. What meanings obtain from the usage of characteristically black religion in the public sphere? What does this case teach about the political value of the black sacred?

As he straddles the line between speech and sermon, Barber’s orations use musical affect to motivate the pursuit of justice. When Barber “tunes up,” performing the characteristic shift from speech into song near the end of his discourses, he facilitates a communal experience of transcendence. At precisely the moment that he makes this sonic shift towards heightened musicality, he also makes a textual shift towards history, pointing to the victories of those who fought for abolition, suffrage, and civil rights as proof that the “arc of the moral universe bends towards justice.” For just a few moments at the end of these messages, then, Barber’s deliberate anachronism fashions transcendence as a resource for resistance. As his listeners feel their place on the universe’s moral arc, they acquire a renewed commitment to bend it even the more. Thus, an ecstatic practice that previous writers have derided as evidence of black Christians’ fundamentally “otherworldly” disposition becomes fuel for political protest.

Barber’s homiletic recalls theologian James H. Cone’s observation that, by taking audiences “from the present to the past and then thrus[ting them] back into their contemporary history with divine power to transform the sociopolitical context,” liberative practices like this mode of address help communities “transcend the limitations of their immediate history and encounter the divine power, thereby creating a moment of ecstasy and joy wherein they recognize that the pain of oppression is not the last word about black life.” I want to argue that this black sacred rhetoric gives transcendence a characteristic sound.

By shifting towards heightened musicality and towards content that reaches across temporal borders, Barber subsumes the specific message of an individual sermon within an experience of divine presence, insisting that God is interested in the plight of the oppressed while offering anticipatory proof that justice will have the last word. His “tuning up” is therefore more than a performance strategy; rather, it is a theological assertion that God is present and that God can be expected to act.