Parable of the Times

Editor’s Note:&nbsp;This is the third article in our continuing&nbsp;series on religion and science fiction (both terms capaciously defined)

Editor’s Note: This is the third article in our continuing series on religion and science fiction (both terms capaciously defined). Read the first two pieces in this series—Audrey Thompson’s “‘Cross’-examining the Biblical Witness in War for the Planet of the Apes” and Emanuelle Burton’s “Deus ex Machina”—and look for a final essay in the weeks to come. 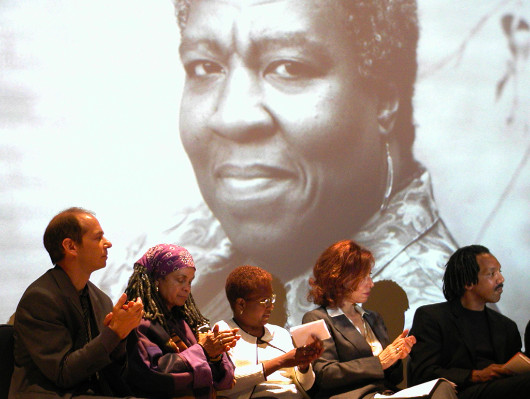 Speculative fiction writer Octavia Butler composed and published her Parable series—a pair of novels intended as the first two parts of a trilogy—in the 1990s. This year marks the twenty-fifth anniversary of Parable of the Sower (1993) and the twentieth anniversary of Parable of the Talents (1998). Originally conceived as a series imagining how space colonization would make “exo-humans” highly adaptive, Butler pondered what sort of religion would go with that context (Canavan, 128). As she focused more on the earth-bound preliminaries of space exploration, Butler came to write instead of the dystopian earth society in which such an adaptive religion could develop.

In a 2005 interview, Butler described the Parable novels as “cautionary tales: if we keep misbehaving ourselves, ignoring what we’ve been ignoring … here’s what we’re liable to wind up with” (Francis, 222-223). What Butler thought we were liable to wind up with was this: in the early twentieth-first century, low taxation and laissez-faire policies eviscerate the economy and public services; infrastructure, police, and fire protection are unreliable and often dangerous to use; the global climate has become unstable and much warmer; and, to address the crisis, the United States elects an incompetent and bigoted corporatist-nationalist. Meanwhile, what’s left of the middle class clings to hyper-local enclaves in a world polarized between a remote corporate elite and the vast nomadic poor. Americans attempt to migrate en masse to Canada, which does not want them, and even the semi-independent states of the U.S. try to keep out citizens of neighboring states. Everyone wants to flee the chaos, and there is nowhere to go.

In this social world, African-American teenager Lauren Olamina creates the new religion, Earthseed. In Sower, Lauren is keenly aware that her elders cling to a hope that society will return to the more stable form of their generation’s youth and early adulthood. She finds their beliefs about institutions, economics, mores, and religion maladaptive for actual conditions; to Lauren, hoping for institutions or others to provide one’s sustenance, protection, and meaning undermines the possibility of effective action. In this protagonist, we see Butler’s belief, strongly anchored in her own experience, that marginal and minority experiences heighten one’s adaptability.

One early event in Sower marks Lauren’s difference: she loans her best friend Joanne a book about using plants, and the friend betrays the secret book to her mother. Lauren is reprimanded for upsetting Joanne with the idea that they will have to fend for themselves in a hostile world. A short time later, Joanne’s family moves away to a kind of corporate slavery, as Lauren continues to prepare to survive the destruction of their gated neighborhood. This tension between characters who see their current circumstances clearly and those who do not animates the first two-thirds of Sower. Indeed, the novel can be read as an experiment in discernment: when things fall apart, who best sees and responds to that fact? What is the psychology of refusing to see it? What conception of human purpose makes one adapt without succumbing?

Butler thought that a certain type of religion goes with fascism. Her fictional fascists use political power, violence, and rape to suppress all forms of religion not their own. Rather than representing resisters as a- or anti-religious, Butler consciously tried to construct a counter-fascistic religion (Canavan, 128-129). Lauren’s father is an academic and Christian minister who functions as the elder of their neighborhood, but she thinks his doctrine of a heavenly savior is ill-suited to actively addressing a declining society. Lauren has religious visions of change as the animating force of the cosmos. She captures these in a notebook of verses—short poetic statements:

All that you touch
You Change.
All that you Change
Changes you.
The only lasting truth
Is Change.
God is Change. (Sower, 11)

Lauren joins these Heraclitus-like ideas with ethical injunctions to attend well and to shape consciously the change in which one is implicated. There is nothing supernatural about Earthseed’s Change: neither a providence nor an otherworldly eschatology, it is a call to responsibility for the shifting patterns of one’s world. The one eschatological element is the goal to bring human communities to other planets, and this telos governs the ethics of Change. In the meantime, Lauren founds a small community in northern California with her partner and friends. The small community’s purpose is survival against the threats of neo-slavery and violent fascist militias.

Earthseed views everything as Change and, as far as I can tell, abjects nothing. Failure to shape change does not stop change, but it deprives it of the conscious intentionality human beings can give it—or abandons it to those who shape change toward the harm of others and the environment. Earthseed does not trust the desire for stasis—for practices, beliefs, or institutions to which people reach in a nostalgic but deadly fantasy of something else’s protection. In a Sower scene that will gladden any scholar of religion’s heart, Lauren’s friend Travis asks her if she really believes Earthseed, as it’s something she made up. Using a stone as an example, Lauren replies that to analyze something is not to make it. Earthseed is her analysis—of herself, of others, of her world. “I was looking for God,” she says, “I wasn’t looking for mythology or mysticism or magic.” Indeed, Earthseed is remarkably low on both narrative and reassurance. Travis gently points out that reassurance is what most people want in religion. So how can this religion bring people in? Butler imagines that it does.

This is perhaps where the author’s social diagnostics and religion-construction intersect most strongly: if the desire for reassurance has produced neo-fascist reassurance for some and thereby become a deadly trap for all those left outside the fascistic in-group, then perhaps effective response lies in a critique of that desire and a different emotional grounding for religion. After all, religions center different emotions and reinforce various patterns of affect. Butler sought an emotional basis for a religion that embraced flux, scientific method, and highly cooperative community.

Here, one of the key traits of her protagonist meshes with the imaginal religion: Lauren Olamina is hyper-empathetic, a condition that is a disability in her social context. Like any sense, this one means many things: Lauren cannot inflict harm on another without also feeling it, and this strongly influences her decisions about when to use violence in self-defense. In Talents, the reader sees one of the more horrific implications when a fascist militia occupies the Earthseed community and rapes Lauren and the other women. Butler’s handling of this hyper/dis-ability is as complex and subtle as her imagination of Change as God. Lauren’s condition also hints at a deep link between emotional structure and knowledge-seeking endeavor: “Blind, closed, suspicious, afraid, ignorance protects itself, and protected, ignorance grows” (Talents, 231). Human emotion, both basic and socially structured, is thus sifted and judged for what it produces in the community and world.

The component ideas of Earthseed are not new. It has elements of Buddhist metaphysics, of Judaic world-shaping through ethical action, and of Stoic focus on what, however small, one can actually do in the moment. It has no contempt for a social or religious out-group, but instead fosters kindness in a violent world, in order to prepare humans for life on other planets. For Octavia Butler, the religion of the Parable series began as a conscious thought experiment that avoided the areligious future more typical of space-exploration speculative fiction and instead imagined a religion for literally novel physical environments. To get there, Butler found herself exploring the preliminary problem of how any religion could be robustly counter-fascistic. In her diagnosis, the ingredients for such a thing include abandoning the shoring-up of static, narrative identities founded on exclusion of an Other, and an unwavering commitment to building knowledge.

See All Articles by Rebecca Raphael