A Huffington Post headline this past spring was arresting: “Evangelical Pastor Claims Traditional Gender Roles Can Prevent Sexual Abuse.” Carol Kuruville reported that “John Piper, an influential Baptist author and speaker and chancellor of a Christian college in Minnesota, claims that a return to traditional gender roles would help keep women safe from sexual abuse.”&nbsp; Kuruville was responding to a podcast by Piper, which addressed the #MeToo movement 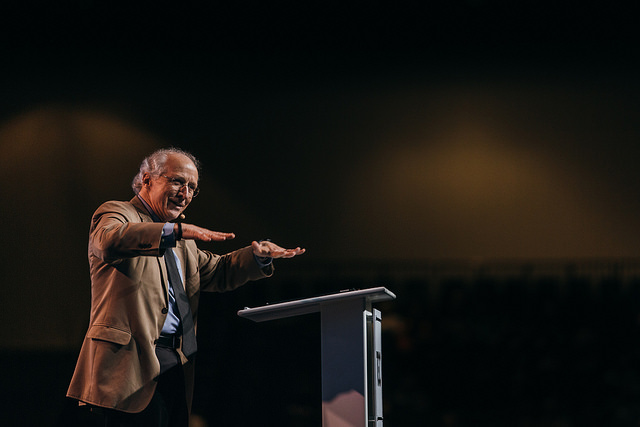 A Huffington Post headline this past spring was arresting: “Evangelical Pastor Claims Traditional Gender Roles Can Prevent Sexual Abuse.” Carol Kuruville reported that “John Piper, an influential Baptist author and speaker and chancellor of a Christian college in Minnesota, claims that a return to traditional gender roles would help keep women safe from sexual abuse.”

Kuruville was responding to a podcast by Piper, which addressed the #MeToo movement. Rather than affirming that a man value sexual boundaries as a matter of biblical justice, Piper roots such respect in a man’s identity as stronger and the woman’s identity as weaker. He focuses on 1 Peter 3.7:

Peter says, “showing honor to the woman as the weaker vessel.” Now, there are ways, of course, that women are stronger than men, and ways women are weaker than men. And Peter is focusing on men being stronger than women and asking, “How shall a man relate to a woman if she is weaker, more vulnerable to his power?” The answer is, “Honor.”

My point is that this is a peculiar, special honor—a kind of honor God has built into the man as the stronger one.

Not surprisingly, Piper’s summons back to patriarchy prompted some pointed responses. Rachel Held Evans, among others, retorted that Piper’s remedy was “dangerously misguided.” Evans gave multiple reasons, including that “contrary to Piper’s argument, patriarchy isn’t about protecting women; it’s about protecting men. It’s about preserving male rule over the home, church, and society, often at the expense of women.”

Gerda Lerner would concur. In her seminal work The Creation of Patriarchy (1986), Lerner observed patriarchy’s link not only to rule, but also to oppression: “As long as both men and women regard the subordination of half the human race to the other as ‘natural,’ it is impossible to envision a society in which differences do not connote either dominance or subordination.”

Historically, multiple factors have produced and reinforced patriarchy, religious conviction among them. As Jimmy Carter noted in his 2009 address to the Parliament of the World’s Religions:

This view that the Almighty considers women to be inferior to men is not restricted to one religion or tradition … Women are prevented from playing a full and equal role in many faiths, creating an environment in which violations against women are justified.

The truth is that male religious leaders have had—and still have—an option to interpret holy teachings either to exalt or subjugate women. They have, for their own selfish ends, overwhelmingly chosen the latter.

Their continuing choice provides the foundation or justification for much of the pervasive persecution and abuse of women throughout the world.

Thus John Piper’s vision of patriarchy is hardly isolated. It is part of a vast traditionalist continuum which concludes, in the words of Lerner, that male domination is “God-given or natural, hence immutable. Thus, it is not be questioned. What has survived, survived because it is best; it follows that it should stay that way.”

But some in the traditionalist “camp” are beginning to question patriarchy. One example is Carolyn Custis James, an adjunct faculty member at the evangelical Biblical Theological Seminary. Also writing in the Huffington Post, James cites David Zurawik’s assertion that the #MeToo movement “is a larger cultural change away from patriarchy … an epic cultural change.” Yet James claims that this seismic societal shift “was well underway long before the … #MeToo tweets”:

The seeds of that shift were planted in the Garden at the beginning of time. That’s when God defined how he wants his world to work when he created his male and female image bearers and commissioned them to do his work in the world together.

Patriarchy was waiting for humanity outside the Garden after the fall. In the hinterlands of Eden human rule over creation was distorted as men assumed power over women and men began to exert power over other men. Patriarchy was never God’s intention.

Lerner reaches a similar conclusion from a historical perspective. Patriarchy, she contends, is the antithesis of being human. However, there is hope. For as “a historic construct,” the “system of patriarchy … will have an end. Its time seems to have nearly run its course—it no longer serves the needs of men or woman, and in its inextricable linkage to militarism, hierarchy, and racism it threatens the very existence of life on earth.”

John Piper’s proposed return to traditional gender roles, though purportedly intended to keep women safe from sexual abuse, is therefore an affront to both the religious and the historical imagination. It abandons the energy of liberation for the deadening dissonance of domination, insult, injustice, inequality.

In early May, New York Times columnist Nicholas Kristof documented the horror of patriarchy. Kristof recounted the violence inflicted on eight-year-old Asifa Bano in January. Dragged to a Hindu temple in India, Bano was raped incessantly for three days before her eventual murder. As Kristof writes:

Murder and rape happen in all societies, but this girl’s body was a battleground: Hindu extremists were trying to terrorize and drive out the Muslim community that Asifa belonged to. The killing triggered a huge controversy in India, with some Hindu lawyers and housewives protesting against prosecution of the murder suspects … To their credit, many middle-class Indians, including Hindus, mobilized to demand justice for Asifa.

Kristof rightly identifies such tragedies as emblematic. He reminds us that just as the #MeToo movement has exposed the realities of sexual assault and crime in the United States, it must also become “a global effort—by rich and poor nations alike—to make [its] principles truly universal.”

All religions have an imperative to advance rapidly, and globally, a new wave of liberating empowerment for women. Though it runs counter to many established behaviors, we need to bolster the #MeToo movement with our resolve and inventive application of our faith traditions. The call resounds to leave behind the offense of patriarchy and (re)embrace the understanding of Gerda Lerner “that men and women built civilization jointly” in the past. We are destined, then, to sustain civilization jointly both today and in the future.

See All Articles by Paul Mundey