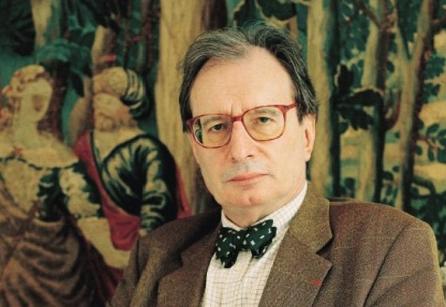 University of Chicago Divinity School scholar Jean-Luc Marion—widely regarded as one of the world’s leading Catholic thinkers—has been awarded the Ratzinger Prize for his lifetime achievements in theology.

The Andrew Thomas Greeley and Grace McNichols Greeley Professor of Catholic Studies and Professor of the Philosophy of Religions and Theology at the Divinity School, Marion works at the intersection of Christian theology, the history of philosophy and contemporary phenomenology—the philosophical study of structures of consciousness.

“Jean-Luc Marion has done more than any other thinker in our generation to explore the kinship between philosophy and theology in Catholic thought and culture,” said Prof. David Nirenberg, dean of the Divinity School. “His writings have deepened these disciplines and modes of thought, and enriched the very language (French) in which he writes. I am delighted that his contributions to theology are being honored, and by a community that has benefitted so much from his teaching.”

Former Vatican spokesman Fr. Federico Lombardi, president of the Joseph Ratzinger-Benedict XVI Foundation, announced Oct. 1 that the 2020 award would be shared by Marion and Tracey Rowland of the University of Notre Dame Australia.

A member of the Académie française, Marion was received as one of the literary society’s immortels in 2010. He is also a member of the Accademia dei Lincei—a science academy based in Rome—and the Pontifical Council on Culture, which fosters relationships between the Catholic Church and other cultures.

Among Marion’s many awards are the Grand Prix du Philosophie de l’Académie Française, the Karl-Jaspers Prize of the city and University of Heidelberg, and the Humboldt-Stiftung Prize. He is also a professor emeritus of philosophy at Université Paris-Sorbonne.

“Jean-Luc Marion has done more than any other thinker in our generation to explore the kinship between philosophy and theology in Catholic thought and culture.”

With scholarly interests in both the history of modern philosophy and contemporary phenomenology, Marion has published numerous books and received nine honorary doctorates. His book Being Given: Toward a Phenomenology of Givenness is regarded as a classic of phenomenology. In more directly historical work Marion has read philosophy through a phenomenological lens, particularly Descartes. He has also worked in Greek and Latin patristics and in medieval thought.

The award was launched in 2011 to recognize scholars whose work demonstrates a meaningful contribution to theology in the spirit of Cardinal Joseph Ratzinger, the Bavarian theologian who became Benedict XVI.

Pope Francis traditionally presents the awards to the winners at a ceremony in November.