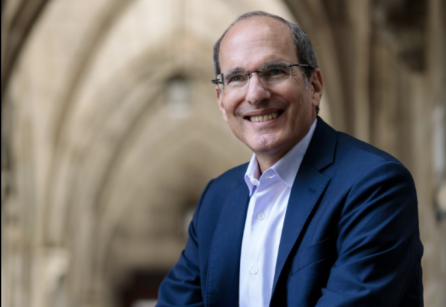 David Nirenberg, who has served as interim dean of the University of Chicago Divinity School since 2018, has been appointed dean, President Robert J. Zimmer and Provost Ka Yee C. Lee announced. The new term begins July 1, 2022.

Nirenberg’s interim deanship concludes on June 30, 2021, at which time he will take a one-year sabbatical. James T. Robinson, the Caroline E. Haskell Professor of the History of Judaism, Islamic Studies and the History of Religions, has agreed to serve as interim dean during this time.

Nirenberg, the Deborah R. and Edgar D. Jannotta Distinguished Service Professor of Medieval History and Social Thought, is a leading scholar of the ways in which Jewish, Christian, and Islamic societies have interacted with and thought about each other. As interim dean, he has advanced the Divinity School’s efforts to bring informed, dispassionate discourse on religion to a global audience.

Prior to leading the Divinity School, he served as executive vice provost, focusing on issues of critical importance related to administrative coordination between the divisions and the College. He also strengthened resources for graduate students, including serving as chair of the Graduate Education Committee, which assessed the current state of graduate education at the University. He previously served as dean of the Division of the Social Sciences from 2014 to 2018 and was the founding Roman Family Director of the Neubauer Collegium for Culture and Society. He holds an MA and PhD in history from Princeton University and an AB from Yale University.

Robinson joined the University in 2003 and conducts research focused on medieval Jewish intellectual history, philosophy, and biblical exegesis in the Islamic world and Christian Europe. He has taught more than 25 courses in in the field of medieval Judaism and was recognized with the University’s Faculty Award for Excellence in Graduate Teaching and Mentoring in 2017. He earned his MPhil in Oriental studies (modern Jewish studies) from Oxford University, an MA and PhD in Near Eastern Languages and Civilizations from Harvard University, and a BA in applied mathematics from the University of California, Berkeley.

The appointment of Nirenberg was informed by the recommendations of the Deanship Review and Advisory Committee elected by the Divinity School faculty and chaired by Robinson.

Read the original story on the UChicago News site.