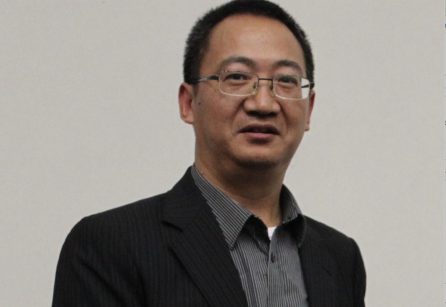 Yu Xue will join the faculty of the Divinity School as Visiting Professor of Buddhism.

Professor Xue, who received his doctoral degree in Buddhist Studies from the University of Iowa, has a broad range of interests including Buddhist-Christian dialogue in modern China, Mahayana Buddhism, Chinese Buddhism, and the theological and historical dimensions of Humanistic Buddhism. His publications include Buddhism, War, and Nationalism: Chinese Monks in the Struggle Against Japanese Aggressions, 1931-1945; (New York and London: Routledge, 2005); and Socialist Transformation of Chinese Buddhism (Hong Kong: The Chinese University Press, 2014) as well as more than 100 research papers. Professor Xue is also the Chief Editor of the  International Journal for the Study of Chan Buddhism and Human Civilization.

The study of Buddhism enjoys a long tradition at the University of Chicago, engaging students and faculty from the Divinity School and several Departments in the Humanities and Social Sciences. ​ While at The Divinity School Prof. Xue will teach courses on a variety of topics in Buddhism which are open to qualified graduate students and College students. Students can view the schedule to register.

This course studies the history and philosophy of Theravada Buddhism in India and other Southeast Asia countries. We first introduce the life of the Buddha and his major teachings within the context of the social and cultural environments in which Buddhism emerged about 2500 years ago. Having thus grasped some fundamental knowledge on Buddhism based on Pali texts, we then embark on examining its philosophical and historical developments from primitive Buddhism to sectarian Buddhism, and to the ramification of Theravada Buddhism in various countries such as Sri Lanka and Thai Land throughout its long history. Towards the end of the quarter, the class briefly discusses the revival of Theravada Buddhism in Indian in connection with the arising of Protestant Buddhism in Sri Lanka in the early 20th century. It is hoped that students having completed this course will be equipped with sufficient knowledge on general history, major philosophy and outstanding cultural tradition of Theravada Buddhism.

This course is designed for students who would like to explore further social philosophy and implication of Humanistic Buddhism and Engaged Buddhism, the two mainstreams of Buddhist development in modern world. We first examine historical background for the arising of Humanistic Buddhism from Mahayana tradition in China and Buddhist revivalism or Protestant Buddhism, the forerunner of Engaged Buddhism in Sri Lanka almost simultaneously at the beginning of 20th century, and their subsequent developments respectively. Having then briefly reviewed some prominent figures such as Taixu (1898-1947), Dhammapala (1864-1933), and their major advocates, we undertake thorough comparative studies of the two Buddhisms by exploring several topics, including modern education and science, environment and ecology, human rights and feminism, politics and violence, suffering and happiness, and others. While discussing these topics, we also examine how Buddhism has transformed itself from the religion of other world to that of this world, how Buddhists have reinterpreted Buddhism in order to fit the idea and practice of modernity, an how new cultures have thus been recreated to cater for the needs of contemporary life both in the East and West. Toward the end of the quarter, discussion may be extended to compare other new religious movements so that students may have a broader vision on religions and their social advocates in contemporary world. Prerequisite: Some knowledge on the general history and basic philosophy of Buddhism.

Meditation is one of core practices in Buddhism and it has now become popularized worldwide. This course studies succinct theories and systematic practices of Buddhist meditation based on both Theravada and Mahayana texts and traditions. In general, the course is divided into 4 parts. 1. Theories and practices of meditation in Pali texts and Theravada tradition—we examine idea and practice of Samadha and Vipassana mainly based on the Satipatthana Sutta and Visuddhimagga; 2. Chinese Texts and Chan/Zen Buddhism—Mohe Zhiguan (摩訶止觀)—The Great Concentration and Contemplation, and the Platform Sutra, two of the most important texts in Chinese Buddhism will be read and discussed; the influence of Daoist meditation such as breathing technique on Buddhism will be examined to show how Buddhist practice of meditation underwent the process of sinicization; 3. Scientific studies and understanding of Buddhist meditation, and dialogue between Buddhist meditation and science—we read and discuss research papers and experimental reports on mediation practice by modern scholars through neuroscience and psychotherapy in the West. A special attention is paid to the discussion on the Western derivatives of Buddhist meditation for different purposes other than the final enlightenment of Buddhism, and on arising of variety of meditation practices such as Mindfulness-Based Stress Reduction (MBSR), Mindfulness-Based Cognitive Therapy (MBCT), Loving-Kindness Meditation (LKM), Cognitively-Based Compassion Training (CBCT), Compassion Cultivation Training (CCT). And 4. Meditation session—the course instructor or meditation masters will provide instructions for students to practice meditation based on theories and methods discussed in the class and through readings. Having completed the course, students are expected to grasp not only the fundamental idea but also basic techniques of Buddhist meditation either for their physical relaxation or mental development. Prerequisite: Some basic knowledge of Buddhism recommended.