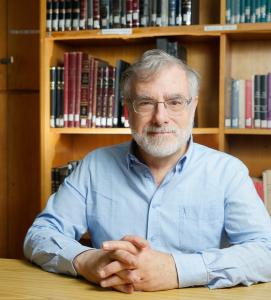 Professor Mandel will be the  the Greenberg Visiting Professor in Winter 2023, teaching two courses, one entitled “Traditions and Transmission: The Aggadic Tale” in the Divinity School, and one entitled “Introduction to Aggadic Literature of the Rabbinic Period” in the College.  He will also offer one public lecture.

Paul Mandel, formerly of the Washington, D.C. area, lives with his family in Jerusalem. He received a B.Sc. and M.Sc. in Physics from M.I.T. in 1975, and, after relocating to Israel, studied Hebrew Literature of the Second Temple and Talmudic periods at the Hebrew University of Jerusalem, where he received the M. A. (1983) and Ph.D. (1996) degrees. His research interests include Jewish biblical commentary and interpretation, especially during the Talmudic period, the literary study of Midrash and Aggadah, Qumran literature, and the formation and transmission of Talmudic literature through oral and written avenues of transmission. He is currently working on a critical edition of the Midrashic commentary to the book of Lamentations, Lamentations Rabbah.

Mandel has taught Second Temple literature and Talmudic and Midrashic texts and transmission at the Hebrew University, Haifa University and the Jewish Theological Seminary of America; his most recent full-time position was at the Schechter Institute of Jewish Studies in Jerusalem, from which he retired in 2021. In 2017 he published the book, The Origins of Midrash: From Teaching to Text (Leiden: Brill). He has served as a Starr Research Fellow at Harvard University (2005), and most recently participated as a Research Fellow at the Herbert D. Katz Center for Advanced Judaic Studies of the University of Pennsylvania, where the research topic for the academic year 2021–2022 was ‘Rethinking Premodern Jewish Legal Cultures.’ His contribution there concerned the transmission of Talmudic texts within the Geonic academies.